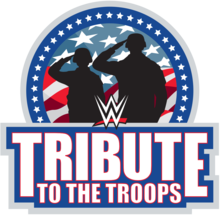 At WWE Tribute to the Troops 2017, WWE Champion AJ Styles teamed up with Randy Orton and Shinsuke Nakamura to battle Jinder Mahal, Kevin Owens and Sami Zayn. Plus, The Shield squared off against Samoa Joe, Sheamus and Cesaro on TV’s most heartwarming and patriotic show of the year.

Longtime former ring announcer Lilian Garcia kicks off the 15th annual WWE Tribute to the Troops from Naval Base San Diego with a moving performance of the Star-Spangled Banner.

NAVAL BASE SAN DIEGO – Before the action got underway at the 15th annual WWE Tribute to the Troops, former longtime ring announcer Lilian Garcia returned to deliver a rousing rendition of the Star-Spangled Banner. WWE Superstars joined the men and women serving at Naval Base San Diego in standing for the incredible performance and joining the troops in “USA!” chants

Michael Cole describes the feeling of bringing WWE Tribute to the Troops back to a military base: WWE.com Exclusive, Dec. 13, 2017

Following an all-out brawl between The Shield and Samoa Joe & the Raw Tag Team Champions, the trios battled each other in singles competition on Raw. Although Seth Rollins defeated Sheamus, and Roman Reigns successfully defended the Intercontinental Championship against Cesaro, Samoa Joe managed to defeat Dean Ambrose – no thanks to Jason Jordan – only intensifying the rivalry further.

Despite The Big Dog being set to defend the Intercontinental Title against Samoa Joe on Raw, The Hounds of Justice were ready for a fight, and the USS Dewey provided the perfect backdrop to a Six-Man Tag Team battle pitting The Shield against Samoa Joe and the Raw Tag Team Champions.

There was certainly no love lost between the trios, but The Shield maintained a strong wave of momentum throughout the contest. Although Samoa Joe and the Raw Tag Team Champions did their best to slow The Hounds of Justice, the relentless offense and teamwork of Rollins, Ambrose and Reigns proved to be too much, as the Intercontinental Champion picked up the victory with a ring-shaking Spear to Cesaro.

After the match, The Shield took a moment to thank the brave men and women of the U.S. Armed Forces in attendance.

Photos: The troops cheer on The Shield in wild bout against Joe & The Bar

Reigns and Cesaro hold nothing back in competitive Intercontinental Title clash

SmackDown Women's Champion Charlotte Flair contends with Carmella and Ruby Riott, who quickly begin working together in a Triple Threat Match at the 15th annual WWE Tribute to the Troops.

Before Charlotte Flair defends the SmackDown Women’s Championship in a Lumberjack Match against Natalya at WWE Clash of Champions, The Queen battled Ruby Riott and Carmella at Naval Base San Diego. On SmackDown LIVE, Natalya helped The Riott Squad initiate a 3-on-1 assault on Charlotte until Naomi sprang to the rescue. Wisely, Charlotte entered Naval Base San Diego with Naomi at her side, as The Riott Squad and other Lumberjacks-in-waiting Lana and Tamina surrounded the ring.

While Triple Threat rules were in play, Riott and Carmella found it to be mutually beneficial to team up against The Queen. Displaying the true spirit of a champion, Charlotte not only managed to keep her opponents at bay, but also regained her focus following a distraction from Natalya, who was observing the match.

Although Ms. Money in the Bank and Ruby Riott showed a team effort, Carmella saw the opportunity to score a pinfall against Charlotte, first throwing Riott out of the ring and kicking her after a near-fall. Unfortunately for Carmella, the shift in attention allowed The Queen to recover and apply the Figure-Eight Leglock for the win.

Following the match, Charlotte addressed the servicemembers in attendance, thanking them for their service and acknowledging they, especially the women who serve, are the true champions.

Photos: Charlotte, Carmella and Riott duke it out in thrilling Triple Threat Match

The Riott Squad causes chaos in battle with Charlotte Flair

Machine Gun Kelly, Sam Harris from X Ambassadors and Bebe Rexha perform "Home," the official theme song of the 15th annual WWE Tribute to the Troops, from "Bright: The Album."

Before SmackDown Tag Team Champions The Usos defend the titles against The New Day, Chad Gable & Shelton Benjamin and Aiden English & Rusev at WWE Clash of Champions, they join forces with Big E, Xavier Woods and Kofi Kingston at WWE Tribute to the Troops.

Before the action got underway in the Eight-Man Tag Team Match during TV’s most heartwarming and patriotic show of the year, The New Day honored the U.S. military by leading the servicemembers at Naval Base San Diego in a “New Day Rocks” chant, modified to say “USA.”

Although The New Day and The Usos will be at odds at WWE Clash of Champions in a Fatal 4-Way SmackDown Tag Team Title Match, they joined forces with the SmackDown Tag Team Champions to face a quartet made up of the other two teams in the battle on Sunday – Aiden English & Rusev and Chad Gable & Shelton Benjamin.

The highly competitive matchup offered a glimpse of the type of action and athleticism that will be on display at Sunday’s pay-per-view. While the team of English, Rusev, Gable and Benjamin put forth a valiant effort, the teamwork of Jimmy & Jey Uso and The New Day created a nearly unstoppable force as the Power of Positivity reigned supreme, and Xavier Woods and Big E picked up the victory for their squad.

Absolution - Paige, Sonya Deville and Mandy Rose - look to build their momentum and send a clear message to the Raw Women's division in a highly competitive battle against Mickie James, Sasha Banks and Bayley at the 15th annual WWE Tribute to the Troops.

After coming to the aid of Asuka on Monday Night Raw to fend off common enemies in the dangerous new Absolution trio, Sasha Banks, Bayley and Mickie James collided with Paige, Mandy Rose and Sonya Deville in a Six-Woman Tag Team Match.

With a score to settle, the trio of Bayley, Sasha and Mickie remained laser-focused on stopping Absolution’s momentum and sending a clear message that the Raw Women’s division would not be intimidated by them. As The Legit Boss and Bayley took the fight to Rose and Deville on the outside, Mickie nearly secured a pinfall on Paige before turning her attention to the brawl outside the ring.

After diving to the outside and ending the brawl, Mickie returned to the ring, but Paige was ready and savagely drove her opponent into the turnbuckle. Paige then seized the opportunity to execute Ram-Paige for the win.

Paige is back in WWE, and she's brought friends from NXT

During the 15th annual WWE Tribute to the Troops, Machine Gun Kelly performs his hit song "Let You Go" from the album "Bloom."

WWE Champion AJ Styles joins forces with WWE's Apex Predator and The King of Strong Style in a Six-Man Tag Team Match against Jinder Mahal, Kevin Owens and Sami Zayn during TV's most heartwarming and patriotic show of the year.

At WWE Clash of Champions, Randy Orton and Shinsuke Nakamura will team up to battle Kevin Owens and Sami Zayn – with SmackDown LIVE Commissioner Shane McMahon and General Manager Daniel Bryan as Special Guest Referees. If Owens and Zayn lose, they will be fired from WWE. Also at WWE Clash of Champions, WWE Champion AJ Styles will defend his title against Jinder Mahal – thus making this Six-Man Tag Team Match at TV’s most heartwarming and patriotic show of the year an absolute must-watch.

With momentum for WWE Clash of Champions at stake, both trios were ready for a fight, with Owens struggling to gain an early advantage against The Viper. Throughout the contest, the teamwork of Nakamura, Orton and Styles proved to be the deciding factor, as the team of Mahal, Zayn and Owens had to rely on The Singh Brothers to turn the tide.

However, the advantage was short-lived, as Styles came into the fray and unleashed a relentless offense on KO. As the contest swung back and forth, chaos soon broke loose as all the participants brawled all over the ring, leading to a Phenomenal Forearm on Owens, an RKO to Mahal and Nakamura delivering a stinging Kinshasa to Zayn for the win.

WWE Champion AJ Styles reflects on the experience of competing in front of the U.S. military before battling Jinder Mahal: WWE.com Exclusive, Dec. 14, 2017