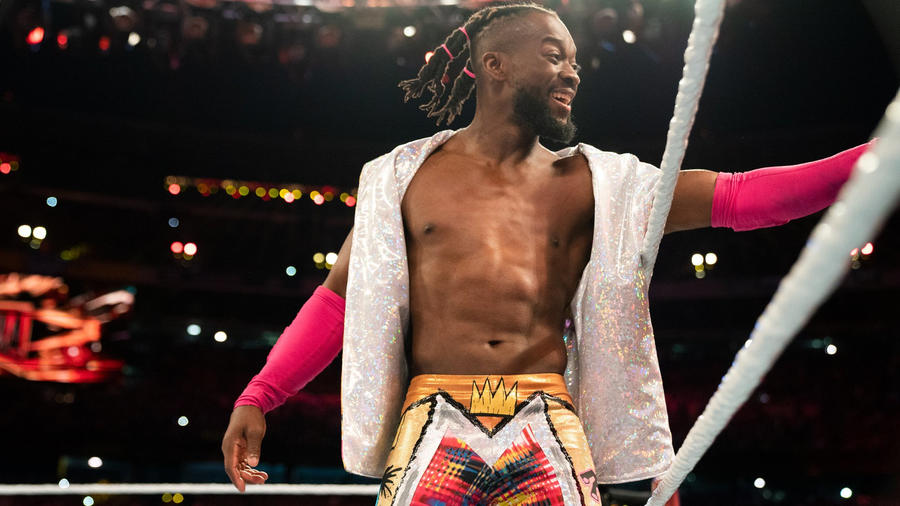 The New Day’s Kofi Kingston is powered by positivity, and he’s used it to catapult himself to new heights, including the WWE Championship.

Since bursting on the WWE scene in 2007, Kingston has established himself as one of WWE’s premier high-flyers. That, paired with his upbeat attitude, made him a perennial favorite of the WWE Universe as he racked up Intercontinental, United States and Tag Team Championships. Kingston also cemented his place in WWE history with a series of daredevil moments where he saved himself from elimination in several Royal Rumble Matches.

When he joined forces with Big E and Xavier Woods to form The New Day, though, no one could have guessed that the trio of unicorn horn-wearing, Booty-O-chomping Superstars would achieve the feats that they have in WWE. In fact, the WWE Universe despised them at first, but soon grew to love them.

As the veteran member of the team, Kingston provides his wealth of knowledge to his younger compadres, and it has paid off. Not only has The New Day become one of the most popular factions in WWE history, but ya boys have held multiple Tag Team Championships between their stints on Raw and SmackDown, including the longest reign in WWE history at an astonishing 483 days.

Kingston's 11 years of hard work and dedication finally brought him to the dance at WrestleMania 35 where he challenged Daniel Bryan for the WWE Title. With the entire WWE Universe behind him, as well as his New Day brothers and the SmackDown locker room, Kofi beat Bryan to claim WWE's ultimate prize. It just goes to show what The Power of Positivity can accomplish.

The 2020 WWE Draft was a mixed bag for The New Day, however, as Kingston and Woods were drafted to Raw after winning the SmackDown Tag Team Titles, though Big E was selected by the blue brand immediately after. History essentially repeated itself in the 2021 WWE Draft, as Kofi and Xavier were selected by SmackDown, but Big E was chosen by the red brand.