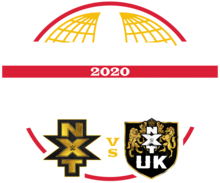 
Brand pride was on the line as the spheres of NXT, NXT UK and 205 Live overlapped in an evening of Battle Royals. The competition was fierce, and the action was unbridled, but when the smoke cleared, NXT’s black-and-gold flag was raised in victory not once, but twice.

BROOKLYN, N.Y. — “I’m on my own, against the wall” might be the opening lyrics of Bianca Belair’s entrance song, but those words also tell the story of her triumph in the Worlds Collide’s Women’s Battle Royal. With no allies in sight, and 17 opponents eying the same victory circle, The EST of NXT powered her way to one of the biggest wins of her career.

As talented as Belair is, besting a loaded field of NXT and NXT Superstars was far from the easiest task. The Horsewomen’s Jessamyn Duke & Marina Shafir operated like two wolves from the same pack, joining forces to send other Superstars flying, until a miscommunication caused Shafir to accidentally knock Duke to the floor and out of the match. Former Mae Young Classic competitor Reina González emerged as a huge threat as well, using her Texas-bred brute force to oust multiple Superstars, from Kacy Catanzaro to Kavita Devi.

Aliyah & Vanessa Borne were prominent agitators, too, until they ran into NXT UK powerhouse Piper Niven, who flattened them with a cross body block. Borne & Boujee recovered enough to eliminate the Scot, but admired their handiwork for too long and wound up being dumped to the floor by Io Shirai and NXT U.K. Women’s Champion Toni Storm.

The Genius of the Sky’s speed helped her stay ahead of, and eventually topple, González, ridding the Battle Royal of its most physically dominant Superstar. Much to the disappointment of the WWE Universe, Storm suffered elimination after Belair countered the Storm Zero.

Dueling chants of “Let’s go Io” and “E-S-T” filled the arena as familiar foes Shirai and Belair came to blows. Although Shirai’s aerial offense put Belair on her heels, The EST of NXT managed to sidestep Shirai’s springboard dropkick and press Shirai high overhead before throwing her out of the ring, leaving now doubt that, on this night, The EST of NXT had the best strategy of all.

Battle Royal win is further proof that Bianca Belair is "the best": WWE.com Exclusive, May 1, 2019

Undisputed ERA have experienced their share of setbacks lately, but Roderick Strong made sure Worlds Collide wasn’t one of them. Strong’s world-renowned ring conditioning helped push The Messiah of the Backbreaker past 19 of NXT UK, 205 Live and NXT’s best and brightest to prevail in the Men’s Battle Royal.

Just as Strong’s victory cannot be disputed, the mayhem that took place before his hand was raised cannot be ignored. The action erupted from the opening bell and rarely let up. The highlight-reel moments came in rapid succession and ranged from the convivial (Eric Bugenhagen gifting Matt Riddle an air guitar so they could rock out together at ringside) to the daring (Dominik Dijakovic inviting the rest of the field to “come and get some” after he eliminated Fabian Aichner and Akira Tozawa).

Superstars from opposing brands came into conflict, creating intriguing standoffs, such as when Riddle and Dave Mastiff plastered each other with strikes. The Forgotten Sons and Joe & Mark Coffey found strength in numbers, while other alliances were strained, as Rinku Singh found out when he was eliminated by his own teammate, the massive Saurav Gurjar. The bodies continued to fly until only four Superstars remained: NXT’s Strong, Riddle and Gurjar and NXT UK’s Tyler Bate.

Collectively identifying the 6-foot-8, 300-pound Gurjar as the next obstacle to be removed, Strong, Riddle and Bate all went after the big man. Gurjar shook them off and even booted The Original Bro over the ropes and out of contention, before Bate channeled his inner Big Strong Boi and muscled Gurjar out of the ring, ending the Indian Superstar’s impressive WWE Network debut.

From there, it was a mad dash between Bate and Strong. Both Superstars tapped into their reserves and clobbered each other with their signature offense as the WWE fans chanted “This is awesome.” After several close calls, Bate, who was on the apron, tried springboarding his way back into the ring, only to be drilled by Strong’s knee strike. The Undisputed ERA member quickly capitalized on the predicament and dropkicked Bate to the floor.

While it’s doubtful that Strong would consider the result a victory for NXT so much as a win for The Undisputed ERA, such semantics matter not. Strong once again shocked the system, but this time the jolt reverberated through the black-and-gold brand and beyond.

Roderick Strong dominates wherever he goes