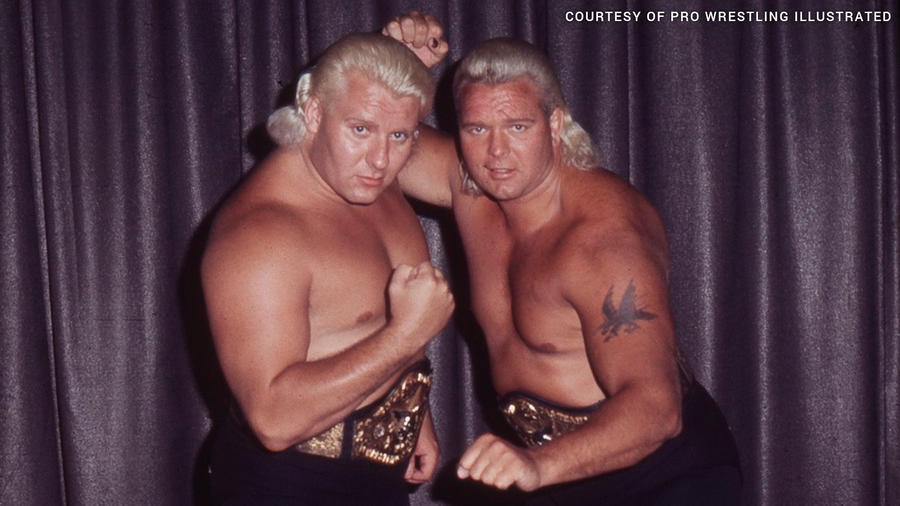 Loved or hated, together or on their own, "Handsome" Jimmy and "Luscious" Johnny Valiant were two of the biggest names in sports-entertainment for over two decades. Some consider The Valiant Brothers the premier tag team of the 1970s. With their bleached blond hair, rugged ring moves and overall flamboyance, the Valiants were revolutionary, giving fans a taste of what sports-entertainment would look like in the future.

After the Valiants parted ways, Johnny redirected his efforts into managing. After managing Hulk Hogan in the AWA in the early 1980s, Johnny came back to WWE. In 1985, Johnny managed the Dream Team (Greg Valentine & Brutus Beefcake) to the World Tag Team Championship. Dino Bravo and Demolition also spent time under his tutelage, and Johnny was known to do color commentary for WWE broadcasts as well. In 1989, he moved back to the AWA, where he managed Wayne Bloom & Mike Enos to the AWA Tag Team Championship. When the AWA closed, Johnny went into semi-retirement.

Jimmy, on the other hand, stayed in the ring. He left WWE and headed to Memphis, Tenn., where he had a lengthy rivalry with Jerry Lawler before moving on to the NWA in the mid-1980s. Rechristened as "The Boogie Woogie Man," Jimmy was one of the most popular wrestlers in the southern United States. His lengthy rivalry with Paul Jones is still revered as one of the greatest of all-time; Jimmy fought Jones and his seemingly never-ending stable of associates for years, and both Jimmy and Jones had their heads shaved by the other during the course of their war. After moving back to Memphis later that decade, Jimmy moved into semi-retirement in the early 1990s.

After their careers ended, both men stayed active. Jimmy opened up a training school in Virginia, while Johnny parlayed his natural charisma into a career as an actor and stand-up comedian. He has appeared as a guest star on several series (including Law & Order and The Sopranos), and his one-man show "An Evening with Johnny Valiant" was critically acclaimed in his adopted hometown of New York City.

For their accomplishments in the world of sports-entertainment, Johnny & Jimmy Valiant were rewarded with the highest honor: induction into the WWE Hall of Fame in 1996. Fittingly, they were inducted by British Bulldog & Owen Hart, who were the reigning World Tag Team Champions at the time.