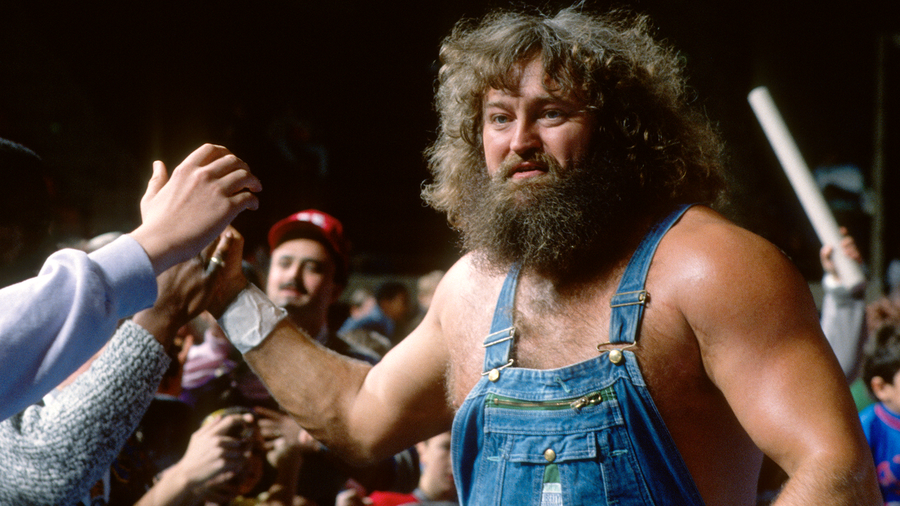 When Hillbilly Jim was mixing it up between the ropes, he seemed happier than a pig in … well, you get the picture.

The fun-loving powerhouse from Mudlick, Ky. was a WWE crowd favorite from the moment he stepped out as "Big Jim" in support of Hulk Hogan in the mid-1980s. After being presented with his first pair of wrestling boots by The Hulkster, Jim quickly transitioned from an overeager follower to a bona-fide sports-entertainer.

Sporting a shaggy beard, bib overalls and a horseshoe-chain necklace, Hillbilly Jim may have looked the part of a hayseed, but at 6-foot-7 and 320 pounds, it quickly was obvious why his infectious theme song warned, "Don't go messin' with a country boy." Whether as a singles competitor or teaming up with his family members — Uncle Elmer, Cousin Luke and Cousin Junior — Jim was always a formidable threat. His potent arsenal of moves, including a big boot and a running legdrop (just as his mentor Hogan used), took full advantage of Hillbilly's imposing size.

Jim held his own in battles against the very biggest, most dangerous Superstars of his era, such as Big John Studd and King Kong Bundy, arguably his fiercest rival. It was at WrestleMania III that Jim elated more than 93,000 members of the WWE Universe, when he joined forces with The Haiti Kid and Little Beaver to defeat Bundy, Little Tokyo and Lord Littlebrook. Though it was a disqualification win, Hillbilly captured the hearts of everyone at the Pontiac Silverdome when he came to the rescue of Little Beaver, picked him up and held him close after he'd been heinously splashed by Bundy. Just as he'd done for Hogan years earlier, Jim served as a loyal protector and friend for an ally in trouble.

Jim regularly competed in WWE until summer 1990, but he continues to make memorable appearances in the spotlight, including a stint as the manager of his cousins, Henry and Phineas Godwinn, and as a participant — and near-winner — in the 19-Man Gimmick Battle Royal at WrestleMania X-Seven. Jim even made a surprise showing at the special "Blast from the Past" edition of SmackDown in April 2012.

It wasn't until the launch of WWE Network in April 2014 that WWE fans would see the self-professed country boy again as a member of the cast of Legends' House. In 2018, the fun-loving Superstar will take his rightful place in sports-entertainment history when he is inducted into the WWE Hall of Fame.