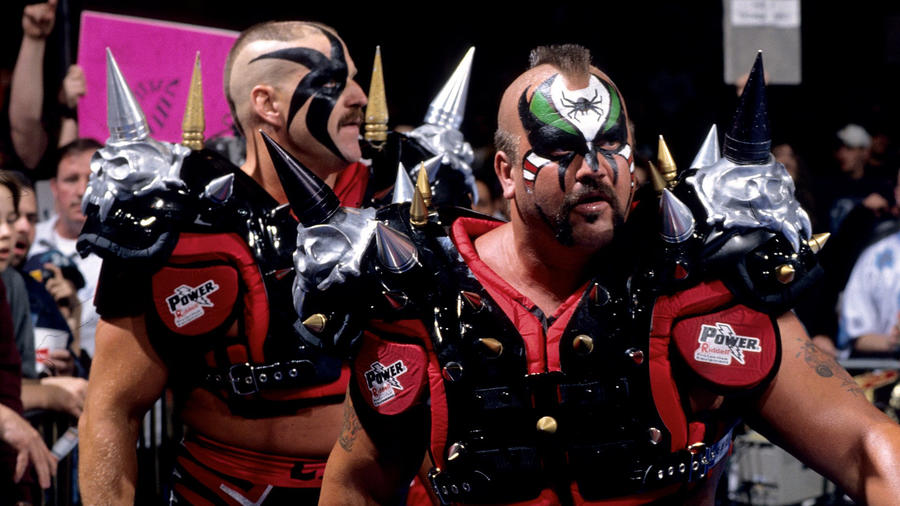 The Road Warriors are the most dominant tag team in sports-entertainment’s history. It’s not a topic of debate. It’s a fact.

Bodybuilder thick with their heads shaved into wild Mohawks like some post-apocalyptic monsters, Hawk & Animal’s intimidating appearance immediately brought them attention, but it was the carnage they caused in the ring that truly gave them a following. Led by their manager, Precious Paul Ellering, The Road Warriors wasted no time in capturing the NWA National Tag Team Titles in 1983 and never looked back.

For the next two decades, it was a massacre every time the duo suited up in their motorcycle boots and spiked leather collars. They smashed Baron von Raschke & The Crusher in Minnesota, stomped through The Midnight Express in Georgia, battered Harley Race & Stan Hansen in Florida. Wherever they went — from the Deep South to Japan — they broke bones and won titles.

With their trophy case overflowing, the team finally arrived in WWE in August of 1990. Now known as The Legion of Doom, the tough guys immediately disposed of Demolition before defeating The Nasty Boys to become the World Tag Team Championship at SummerSlam in 1991. With this victory, The Legion of Doom became the only duo in the history of sports-entertainment to hold the tag team titles in AWA, NWA and WWE.

Following a stint in WCW, they returned to WWE at WrestleMania XIV with the updated name of L.O.D. 2000 and Sunny as their manager. In many ways, this was Hawk & Animal's last great stand. In the years that followed, Hawk struggled with personal problems, while Animal tried to reignite The Road Warriors magic with a series of different partners. Unsurprisingly, the rare chemistry that the two powerhouses had was difficult to recreate.

Sadly, Road Warrior Hawk passed away in 2003, bringing an end to the roughest team to ever enter the ring. Animal honored his fallen friend in 2005 when he returned to WWE and teamed with Heidenreich to defeat MNM for the WWE Tag Team Championships in a match dedicated to Hawk. It was the last time a member of The Road Warriors held a major North American title.

In the many years since The Road Warriors first exploded on the scene in 1982, countless teams have attempted to imitate the explosive duo, but no one ever did it. It is a testament to Hawk & Animal's unmatched influence that no pair has come close to matching their success, dominance and wealth of championships and honors including being inducted into the WWE Hall of Fame.