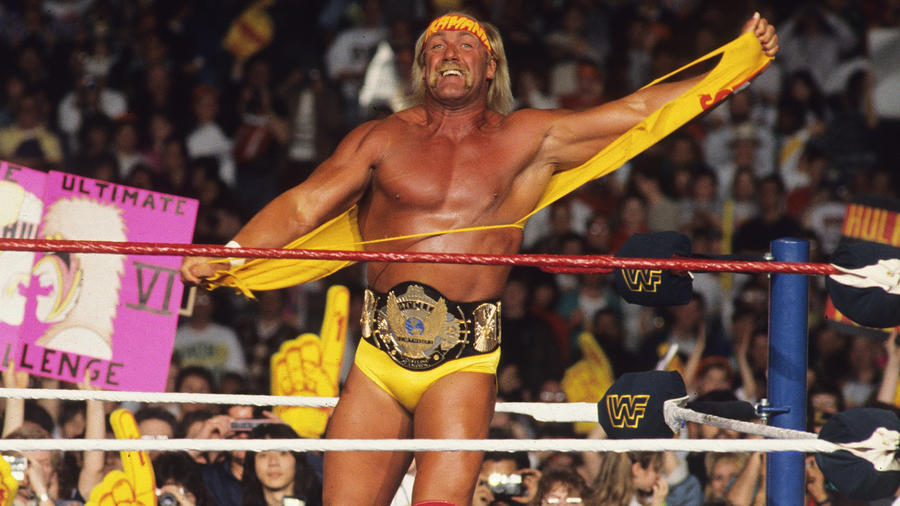 Is there a name more synonymous with sports-entertainment than Hulk Hogan? The key figure in WWE’s rise from regional attraction to worldwide entertainment leader in the 1980s, The Hulkster’s superhuman size and undeniable charisma set the standard for what a Superstar should be. A larger-than-life icon, he packed 93,173 WWE fans into the Pontiac Silverdome, won six WWE Championships, starred in movies, television shows and his own animated series and became an idol to a vast legion of fans he dubbed his Hulkamaniacs.

Clad from head to toe in his trademark yellow and red, “The Real American” first established his unbridled patriotism when he legdropped his way through The Iron Sheik to win the WWE Championship in 1984. He became a household name from there, headlining the inaugural WrestleMania while brushing his 24-inch pythons against celebrities like Cyndi Lauper and Billy Crystal on MTV and “Saturday Night Live.” The Hulkster’s fanbase knew no bounds as Andy Warhol showed up at his matches and millions of children listened intently as their hero urged them to “say their prayers and eat their vitamins.”

Hogan’s massive presence had a way of making things feel significant. His greatest rivals — “Rowdy” Roddy Piper, King Kong Bundy, Ultimate Warrior — became more noteworthy parts of WWE history when they stepped through the ropes to face The Immortal One. His best matches read like a shortlist of WWE’s defining moments. Who could forget Hulk’s showdown with Andre the Giant at WrestleMania III, his collision with Randy Savage at WrestleMania V, his iconic encounter with The Rock at WrestleMania X8?

And The Hulkster was nothing if not smart. Leaving WWE for WCW in the mid-90s, he turned villain when he sensed audiences growing tired of his heroism. As the ringleader of the New World Order, he redefined himself as a cowardly bad guy and took WCW to the top of the sports-entertainment heap.

The nWo experiment may have sold some T-shirts, but fans eventually grew nostalgic for the Hulk Hogan they grew up with. That Superstar returned to WWE in 2002 in all of his red and yellow glory to ask a new generation of opponents that eternal question: “Whatcha gonna do when Hulkamania runs wild on you?” This thrilling rumble down memory lane brought Hogan his final WWE Title, entry into the WWE Hall of Fame and proof that there wouldn’t be WWE without Hulk Hogan.

To much fanfare, The Hulkster returned to WWE in 2014, hosting WrestleMania 30 and celebrating his 61st birthday live on Raw. Now that he's back home, what else will Hulkamania have in store for the WWE Universe?