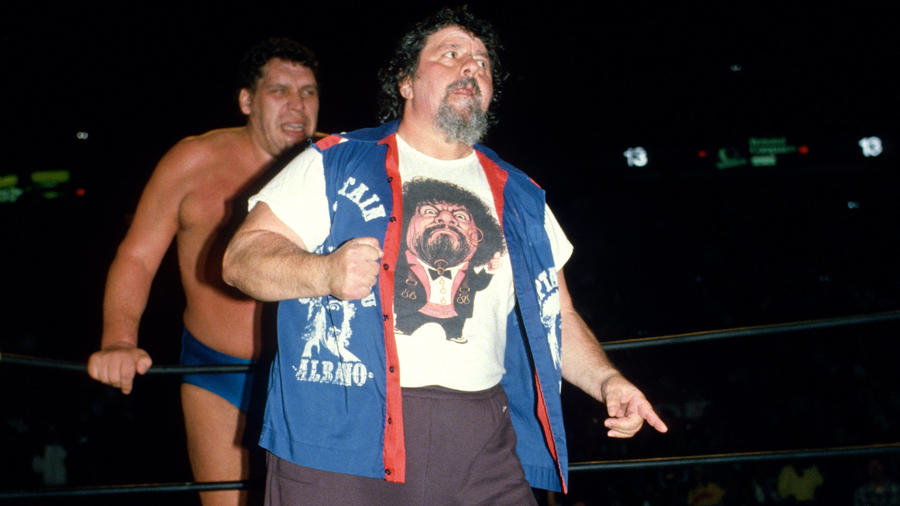 He was "often imitated, never duplicated." Rightfully so, because the legendary Captain Lou Albano will always be one of a kind. With his open Hawaiian shirts, outrageous facial hair and trademark rubber bands hanging from his cheek, Captain Lou may not have looked like much of a success, but his record speaks for itself.

Albano was an excellent athlete as a youth, attending the University of Tennessee on a football scholarship. After a stint in the United States Army, he began his sports-entertainment career in Canada in 1953. Albano soon began teaming with Tony Altimore; together they were known as "The Sicilians." After coming to WWE in the 1960s, they defeated the legendary Bruno Sammartino & Spiros Arion to win the WWE United States Tag Team Championship in 1967.

After the breakup of The Sicilians, Albano transformed himself into a manager, making it his sole mission to end the lengthy WWE Championship reign of Bruno Sammartino. This made him perhaps the most hated man in the promotion, but in 1971, he accomplished his goal when protégé Ivan Koloff defeated Sammartino in Madison Square Garden to end the Italian champion's reign of seven-plus years. Koloff's reign lasted only three weeks, and despite managing several other Hall of Famers, Koloff was the only World Champion Albano ever managed. He would lead Don Muraco, Greg Valentine and Pat Patterson to the Intercontinental Championship but never again tasted a World title.

Having been a tag team star himself, though, it was in managing duos where Albano excelled. In the span of 20 years, he managed 15 different teams to the World Tag Team Championship, earning the nickname "The Guiding Light" and a record that may never be broken. Several of his championship duos featured Hall of Famers, including fellow 1996 Hall of Fame inductees The Valiant Brothers and 2007 inductees The Wild Samoans. Mr. Fuji & Mr. Saito, The Executioners and The Moondogs were just of few of the other teams to become World Tag Team Champions under Captain Lou's guidance.

After 15 years of being one of the most hated men in sports-entertainment, however, Albano had a change of heart. In 1983, he appeared in Cyndi Lauper's music video for "Girls Just Want to Have Fun" and later claimed to be the catalyst to Lauper's success. Thus began the legendary "Rock 'n' Wrestling" Era in WWE, which combined with Hulkamania, helped launch WWE into a new stratosphere in the mid-1980s. After a lengthy rivalry with the singer (which saw Lauper's pal Wendi Richter win the Women's Championship from Albano's client The Fabulous Moolah), Captain Lou apologized to Lauper and became an instant fan favorite. Once the Rock n' Wrestling phenomenon began to wind down, Albano led the British Bulldogs to the World Tag Team Championship in 1986 before leaving WWE.

In his time away from WWE, Albano capitalized on his newfound celebrity. He appeared in several episodes of shows such as Miami Vice before starring in the film Body Slam alongside fellow Hall of Famer "Rowdy" Roddy Piper in 1987. Albano also managed and performed with rock group NRBQ, who wrote the song "Captain Lou" in his honor. Later, the Captain starred in The Super Mario Bros. Super Show, a hybrid live-action/animated show; Albano played Nintendo legend Mario in the live portion while also voicing his cartoon counterpart.

After nearly a decade away from the ring, however, Captain Lou returned for one final hurrah. In 1994, Albano joined former protégé Afa the Wild Samoan as advisor of Samu & Fatu, the Headshrinkers. Together, Albano & Afa had success once more, leading Samu & Fatu to the World Tag Team Championship. The Headshrinkers thus became the final team on Captain Lou's legendary list of World Tag Team Champions.

In 1996, Albano claimed his rightful place in the pantheon of the elite, the WWE Hall of Fame. Inducted by legendary New York media personality Joe Franklin, Albano was finally truly recognized as one of sports-entertainment's elite. He was often imitated but never duplicated, and he certainly will never be forgotten either.