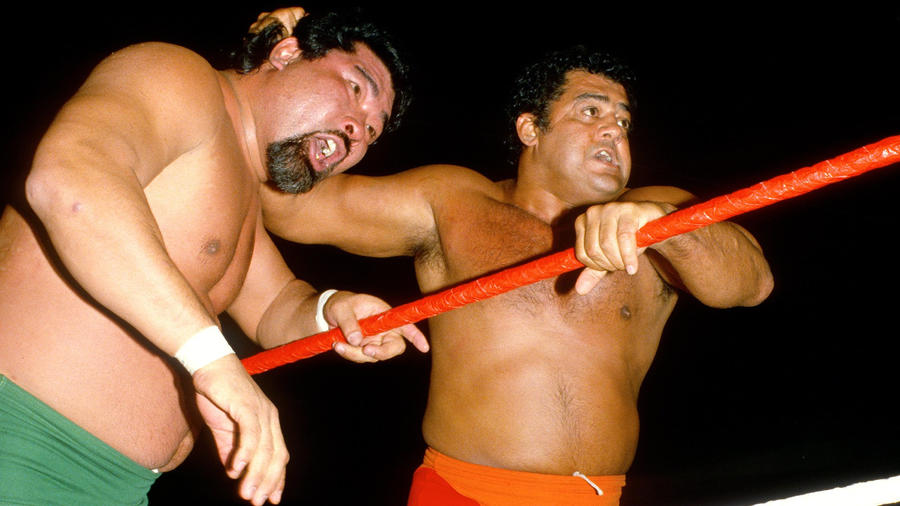 The island of Puerto Rico has produced numerous sports-entertainment Superstars over the years, but none have ever been — and perhaps will never be — as successful as Pedro Morales. From becoming the first-ever WWE "Triple Crown" Champion to his induction into the Hall of Fame, Morales' near 30-year career is one full of history.

Born on Culebra Island, just off the shore of the Puerto Rican mainland, Pedro Morales moved to Brooklyn, N.Y., as a child and began to foster dreams of becoming a sports-entertainer. That dream came true in 1959, as Morales — still only a teenager —made his debut in his new hometown of New York City.

In the ring, his style could be described as workmanlike — that is, until he lost his temper. Then, all bets were off, and his opponents were in trouble. A tremendously powerful puncher, Morales was also well-versed in the technical aspects of the game and utilized the Boston Crab better than anyone in the business. He prided himself on being in tremendous condition and often won his bouts by simply wearing out his opponents.

Morales soon headed out west, where he dominated the Los Angeles and San Francisco circuits in the 1960s en route to racking up numerous regional championships. In 1970, however, he headed back home to New York City and WWE, where he would finally burst into national prominence.

On Feb. 8, 1971 — less than a year after joining WWE — Morales avenged friend Bruno Sammartino and defeated Ivan Koloff in Madison Square Garden to win the WWE Championship. Already incredibly popular, Morales drew rabid crowds every time he returned to his hometown, which had a large and loyal Puerto Rican fan base. One of his most memorable matches came at Shea Stadium, as he and former WWE Champion Sammartino battled to a classic 75-minute draw.

Shortly after losing the gold in late-1973, Morales headed to the NWA, where he continued his successful ways. Pedro earned numerous regional NWA championships and also spent some time in his native Puerto Rico, where he held tag team gold with another Puerto Rican legend — Carlos Colon.

Morales returned to WWE in 1980 and made history once again at Shea Stadium. On Aug. 9 of that year, Morales & then-WWE Champion Bob Backlund defeated The Wild Samoans to win the World Tag Team Championship; unfortunately, because WWE Superstars were forbidden to hold multiple championships at the time, they had to relinquish the gold almost immediately.

No matter for Pedro, who went on to further singles stardom. Just four months later, he once again etched his name in the annals of sports-entertainment by defeating Ken Patera for the Intercontinental Championship. With the win, Morales became the first Superstar to accomplish the career "Triple Crown" by winning the WWE, Intercontinental and World Tag Team Championships. He would go on to become a two-time Intercontinental Champion, losing and regaining the title from Don Muraco during their intense 1981 rivalry.

After losing the gold a second time, Morales continued to be one of WWE's most popular Superstars, but would never again wear a championship. He nearly won the King of the Ring tournament in both 1985 and 1986 -- losing to Harley Race in the 1986 finals -- before finally hanging up his boots for good in 1987. Soon after retirement, however, Morales segued his popularity into a short career in the broadcast booth, where he became a Spanish-language commentator for WWE events.

In 1995, Morales was given his place among the all-time greats when he was inducted into the WWE Hall of Fame. His induction was presented by fellow Puerto Rican Superstar Savio Vega.

Because Morales was a soft-spoken man who didn't do outrageous things, he is sometimes overlooked when the names of the all-time greats are mentioned. However, in addition to being one of the greatest to ever set foot in a ring, Morales was loved by the public and well-respected by his peers. His name was synonymous with making history, earning Pedro Morales his place in the pantheon of sports-entertainment elite.