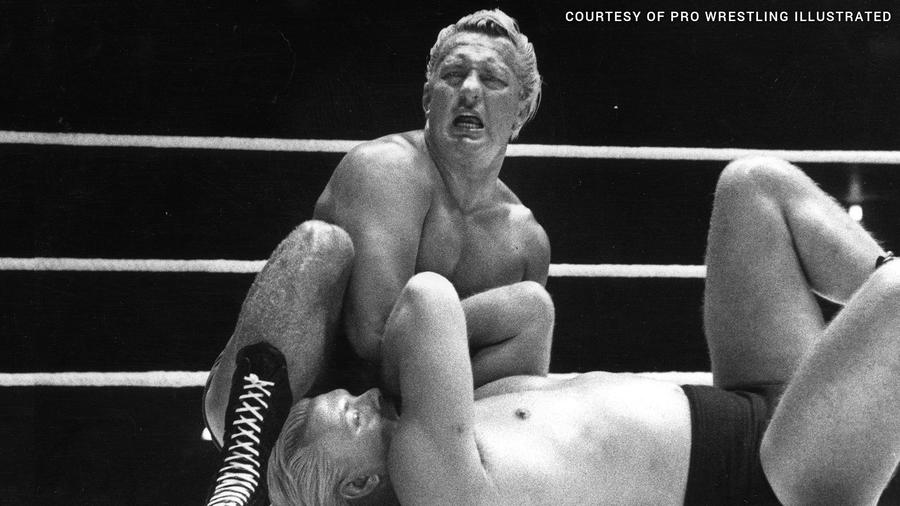 Buddy Rogers was never demure in broadcasting his attributes. So in 1961, when he dethroned Pat O'Connor for the NWA World Championship in Chicago's Comiskey Park, the original "Nature Boy" couldn't resist getting on the microphone and heaping praise on himself.

Said the smug Rogers, "To a nicer guy, it couldn't happen."

This was Rogers' style throughout his sports-entertainment career, a manner that grated on his fellow Superstars behind the scenes as much as it did on the spectators. But the inaugural WWE Champion seemed to care little about how he was perceived. He legitimately was great, and even his harshest detractors could do nothing to change that.

Rogers was a former Camden, N.J. police officer who began his career by competing as Herman Rohde in New Jersey in 1939. When he later moved on to Texas, however, he transformed into the "Nature Boy," bleaching his hair and taking his nickname from a popular jazz song. With his platinum blond locks, rich tan, haughty strut and signature Figure-Four Leglock, Rogers stood out.

His services were sought all over the country, and are credited with galvanizing businesses in struggling promotions. His 1961 match with O'Connor set attendance and gate records that would not be surpassed for two decades. But Rogers was considered a difficult person by many peers, and was continuously embroiled in controversy.

In addition to being NWA World Champion, Rogers competed in Vincent J. McMahon's Capitol Wrestling Corporation in the 1950s and 1960s, twice winning the United States Tag Team Championship. In fact, it would be McMahon who would lead Rogers to a moment that will forever live in sports-entertainment lore.

In early 1963, Rogers lost the NWA Championship to Lou Thesz in Toronto. While most promotions in the United States recognized the title change, McMahon and partner Toots Mondt cried foul. They insisted that the NWA Title could only change hands in a two-out-of-three falls match, and declared the result of the single-fall contest invalid. In fact, they claimed that Rogers had won a tournament to become the titlist of their new company, WWE.

Rogers did not wear the crown for long, however. On May 17, 1963, Bruno Sammartino defeated him in 48 seconds in Madison Square Garden to claim the title. Rogers claimed he'd suffered a heart attack shortly before the match, but Sammartino claims the dethroned king was simply making excuses.

After the loss, Rogers vanished from sight, turning up briefly in different promotions but disappearing almost as quickly. Then, in 1979, he appeared in North Carolina, heckling and then attacking a new "Nature Boy," Ric Flair, in the Mid-Atlantic wrestling territory.

During his time there, Rogers would manage such Superstars as Jimmy "Superfly" Snuka, Ken Patera and Big John Studd, but it was his rivalry with Flair that is most notable.

The "Battle of the Nature Boys" was a pivotal moment in Flair's career. "Slick Ric" admitted to emulating many of Rogers' mannerisms and ring moves, and when Flair defeated his idol with a Figure-Four Leglock in Greensboro, N.C., in 1978, he earned the right to proclaim that "To be The Man, you have to beat The Man."

In the early 1980s, Rogers returned to WWE. Originally hosting an interview segment called "Rogers' Corner" on WWE programming, Rogers soon found himself once again in the corner of Snuka. In an example of enterprising journalism, Rogers discovered that Captain Lou Albano had misappropriated funds due to Snuka; "Superfly" later turned against Albano, becoming one of the most popular Superstars in WWE almost overnight. Rogers was firmly in his corner, even occasionally showing traces of the old "Nature Boy" when they paired up in tag team bouts. However, after breaking his hip in a tag team match with Snuka against Albano & Ray Stevens, Rogers retired for good.

Amazingly, Rogers almost returned to the ring one final time in 1992. The 71-year-old Rogers was set to face off against another impostor "Nature Boy," Buddy Landell, in Philadelphia, but the match never happened. Sadly, later that year, Rogers passed away due to complications from a heart attack and multiple strokes.

In 1994, Rogers was honored posthumously, inducted into the WWE Hall of Fame by then-WWE Champion Bret Hart. It was a fitting tribute for the man who was the first WWE Champion 30 years earlier and put a stamp on his legacy as one of the greatest sports-entertainers of all-time.