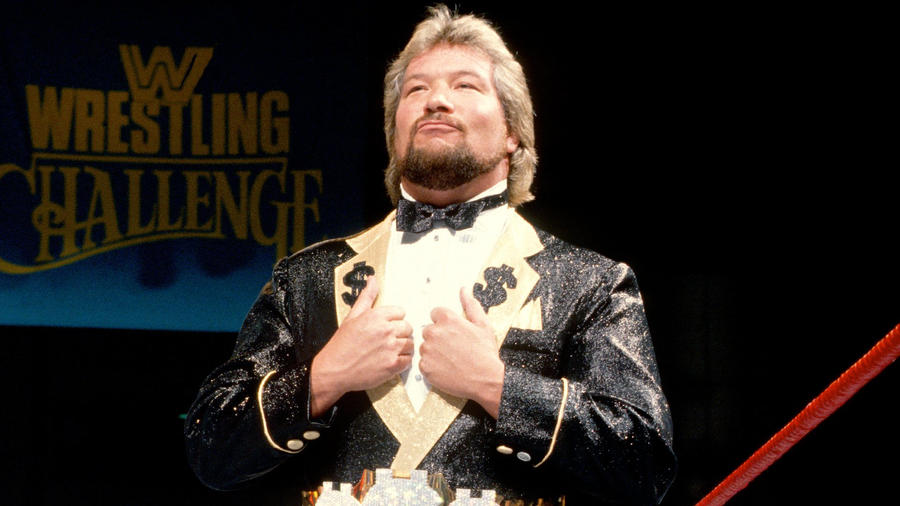 Every time his diabolical laugh echoed over arena loudspeakers, children across the country clutched their allowances a little tighter. That’s because, for the dastardly “Million Dollar Man” Ted DiBiase, everybody had a price.

With his nose higher in the air than his private 747, DiBiase began every match barking orders at his manservant, Virgil, before displaying a truly priceless technical arsenal and disposing of his opponents handily with his nearly inescapable sleeper hold, The Million Dollar Dream. As a tip for their services, DiBiase would then stuff $100 bills into their unconscious mouths.

It’s no surprise that the Million Dollar Man had several brushes with WWE gold, the most respected of which is his showing in the WrestleMania VI WWE Championship Tournament. En route to the finals, which would decide the new owner of the vacant WWE Championship, DiBiase defeated Hacksaw Jim Duggan and Don Muraco before ultimately losing to Randy Savage. A tag team rematch featuring the Mega Powers (Savage and Hulk Hogan) vs. The Mega Bucks (DiBiase and Andre The Giant) headlined the inaugural SummerSlam in 1988.

The Million Dollar Man wasn’t all talk, either. Using his nearly limitless fortune, DiBiase purchased everything, from the No. 30 spot in the 1989 Royal Rumble, to Superstar contracts, to the WWE Championship itself after buying it from Andre the Giant. Ultimately, DiBiase created his own title – the solid gold, diamond-laced Million Dollar Championship – which was never officially recognized by WWE brass.

DiBiase’s greatest investment, perhaps, was The Undertaker. As part of The Million Dollar Man’s 1990 Survivor Series squad, the Deadman debuted as the ominous fourth man, funded by the wealthy team captain. Since then, Taker’s value has appreciated exponentially, and DiBiase can legitimately claim to have discovered the most legendary WWE Superstar of all time.

As a three-time WWE Tag Team Champion with partnerin Money Inc., and the head of the star-studded Million Dollar Corporation in the mid-90s, DiBiase’s active career wound down with a brief run in WCW before he was inducted into the 2010 class of the WWE Hall of Fame.