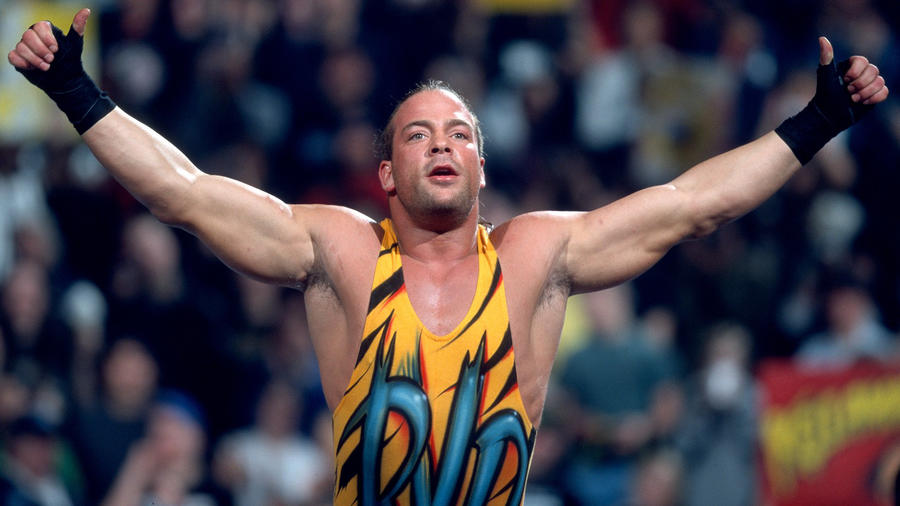 Who has two thumbs, scored a historic WWE Championship win in New York City and is perhaps the most popular ECW icon of all time? Say it with him now: “Rob! Van! Dam!”

When the chilled out martial artist from Battle Creek, Mich. broke into ECW in 1996, he made an impact like few grapplers ever have. Trained alongside future partner and rival Sabu by Sabu’s uncle, The Original Sheik, RVD had the sound fundamentals needed to thrive in the Land of Extreme. Van Dam’s laidback demeanor directly contradicted his agility in the squared circle, which made him an instant favorite among the Philadelphia faithful. He quickly scored victories over Axl Rotten, Mikey Whipwreck and Sabu, but it was his partnership with the latter that launched The Whole Dam Show to a new level.

By himself, RVD was innovative. With Sabu, he was revolutionary. The game-changing duo accomplished things inside and outside the ring that few could have imagined. Employing chairs, ring ropes and guardrails, the pair was led by Bill Alfonso, who blew hard on his whistle while his crown jewels flew through the air. Their stunning bout against The Eliminators at Cyberslam 1997 paved the way for WWE’s TLC Matches, marking just one example of RVD’s trailblazing style.

By mid-1997, the self-proclaimed “Mr. Monday Night” had jumped ship to join Jerry “The King” Lawler in a crusade on Raw to end all things extreme. He eventually returned to ECW, and while he didn’t completely abandon his cocky ways, he was fully embraced by the outspoken fans. RVD captured the ECW Television Championship and held it for an astonishing 700 days — nearly two full years. He never even lost the title, only relinquishing it due to serious injury. But it wasn’t the last championship gold to go around Van Dam’s waist.

At WrestleMania 22, RVD achieved arguably his greatest WrestleMania moment when he defeated five other Superstars to win the Money in the Bank Ladder Match. True to his persona, Van Dam made the unorthodox choice of announcing his earned championship match ahead of time, declaring it would be at ECW One Night Stand inside an emotionally charged Hammerstein Ballroom in New York City. The rowdy Big Apple crowd was firmly in Mr. Pay-Per-View’s corner as he pinned John Cena to win the WWE Championship in one of the most memorable moments in WWE history.

RVD led a relaunch of the beloved ECW brand as both the WWE and ECW Champion in 2006, but by 2007 he had disappeared from WWE. He would not return until July 2013 when the ageless Superstar stepped back into WWE ring to score a series of impressive victories — including a win over Cesaro on the SummerSlam 2014 Kickoff — that showed he hasn't lost a step.