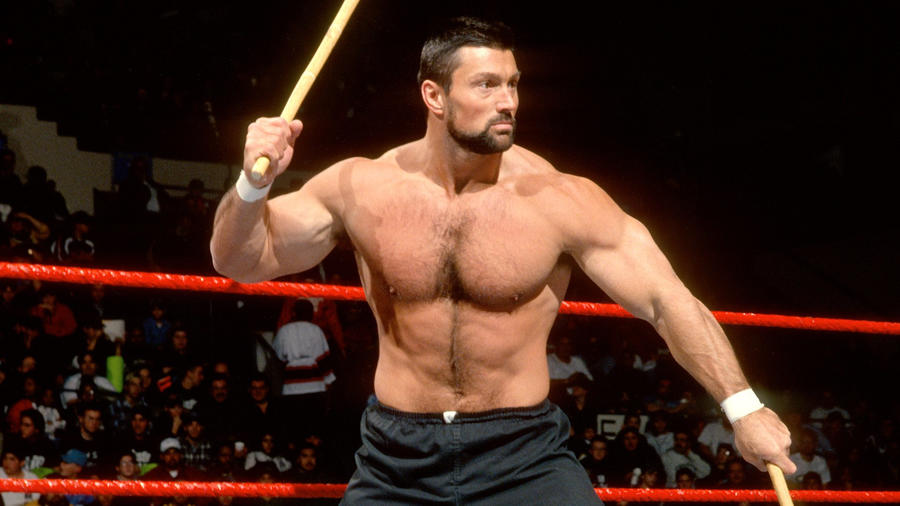 Steve Blackman didn’t say much during his time in WWE, but the truth is he didn’t have to. A dominant powerlifter, a master of Shotokan karate and a serious problem with a weapon, the former Hardcore Champion let his Kendo stick do the talking.

How dangerous was Blackman? Ask Shane McMahon. At SummerSlam 2000, The Lethal Weapon put Mr. McMahon’s only son in the hospital after ruthlessly knocking him off a towering entrance set. As if that wasn’t enough, Blackman then launched himself off the side of the structure, plunging more than 20 feet down onto the unconscious Boy Wonder.

Blackman didn’t just dish out punishment, though. He knew how to fight back from it. In 1989, mere days after signing a contract with WWE, he was stricken with a serious case of malaria while wrestling in South Africa and nearly died. The Pennsylvania native’s prime physical condition is what kept him alive, but it still took him six grueling years to recover completely from the debilitating sickness.

The Lethal Weapon finally made his first WWE appearance on the Nov. 3, 1997, edition of Raw — eight long years after he was originally scheduled to debut. On that night, Blackman hopped over the guardrail to defend an outnumbered Vader against Canadian baddies Jim Neidhart, Doug Furnas and Phil Lafon. His focused dissection of three tough Superstars immediately established Blackman as a seriously dangerous individual.

The stoic martial artist showed WWE fans just how tough he was in the years that followed as he brutalized Marc Mero in a full-contact Brawl for All fight, punished Ken Shamrock in a series of vicious contests and brought legitimacy back to the Hardcore Title when he beat Crash Holly for the championship in 2000. A six-time holder of the no-rules title, Blackman dispatched rough customers like Raven and Saturn with his calculated strikes and Filipino fighting sticks.

Stakes weren’t always so high during Blackman’s career. He proved he could be lighthearted in his brief partnership with the unpredictable Al Snow as the mismatched Head Cheese. The polar opposites entertained the WWE Universe with their constant bickering, but The Lethal Weapon was always at his best when the time for talk was over. Blackman parted ways with WWE in October 2002.

Blackman returned to WWE for a single night on the Raw 15th Anniversary Special on December 10, 2007, taking part in a legends battle royal.