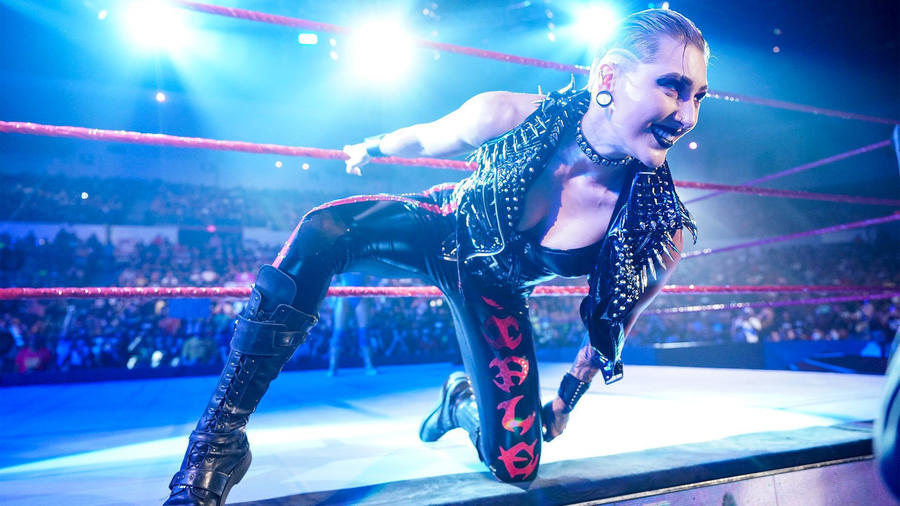 Rhea Ripley may be new to Monday Night Raw, but she brings a long list of impressive accolades with her to the red brand.

A standout in the WWE Performance Center and the Mae Young Classic, Rhea Ripley entered NXT UK already a seasoned and cutthroat grappler with one goal on her mind, to rip the NXT UK Women's division apart.

The ultra-aggressive and terrifyingly strong Aussie embraced her true self, and that has spelled bad news for anyone who faces her, as she already had the physical goods to stand toe-to-toe with any Superstar in sports-entertainment.

Armed with a take-no-prisoners attitude, it took little time at all for Ripley to secure her a place in history. After battling her way through Xia Brookside in the Quarterfinals and Dakota Kai in the Semifinals, the merciless Mosh Pit Kid made history by conquering Toni Storm in the hard-fought Finals of the NXT UK Women’s Championship Tournament to become the first-ever NXT UK Women’s Champion.

After an impressive performance in the 2019 Royal Rumble Match, Ripley made history once again when she dethroned long-standing NXT Women's Champion Shayna Baszler to capture the title. The Nightmare again turned heads in her second Royal Rumble Match, finishing runner-up in 2021 after a tenacious final battle with Bianca Belair.

Ripley has been anything but shy about establishing her dominance in her new surroundings on Raw. A champion everywhere she's been, Ripley added to her growing trophy case by defeating Asuka for the Raw Women's Championship at WrestleMania. The Nightmare followed up by forming an unlikely WWE Women's Tag Team Champions duo with Nikki A.S.H., and the pair was drafted by Raw in the 2021 WWE Draft.

Following a split from tag partner Nikki A.S.H and a brief partnership with Liv Morgan, The Nightmare joined The Judgment Day, a treacherously dark group founded by Edge and Damian Priest. The night after Hell in a Cell, Ripley and Priest shocked the WWE Universe, turning on their leader Edge and aligning with Finn Bálor. With this new-look Judgment Day now running things on Raw, the future looks devilshly dark for The Nightmare.