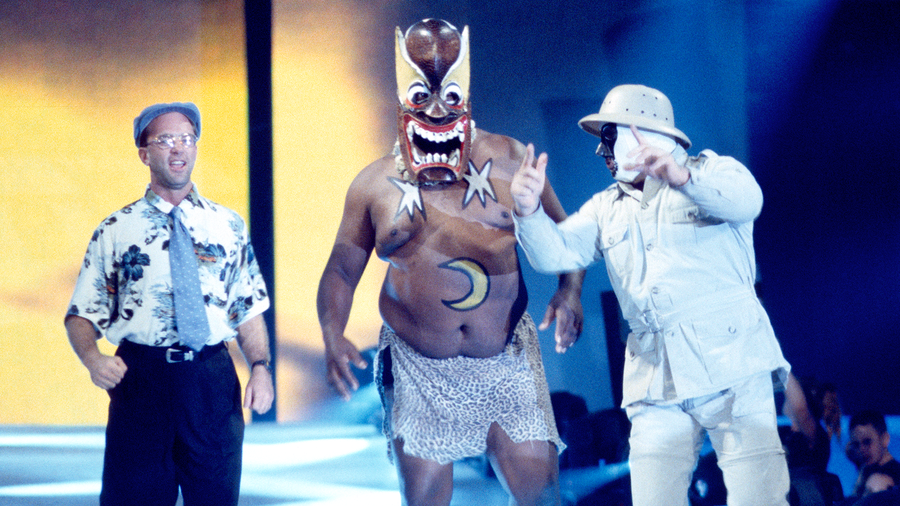 Hailing from the wilds of Uganda, Kamala was one of the most savage and terrifying Superstars sports-entertainment has ever seen. No one — not even his long-time handler, Kim Chee — ever seemed to know what the Ugandan Giant's next move would be, leading to a lot of bad nights for his foes.

Behind that savage exterior, however, was the heart of a warrior. Not much was known about Kamala's life before venturing into sports-entertainment, other than that he was a savage from the wild who apparently worked as a bodyguard for former Ugandan leader Idi Amin. He was never seen without Kim Chee, as he spoke no English — conversing only in loud yelps and grunts — and looked like a true jungle beast.

Barefoot and clad only in a loin cloth, face paint, and moons and stars painted on his chest, Kamala came to the ring wearing a ritual African tribal mask and carrying a spear, often slapping his ample belly as well. A disturbing enough sight for opponents, made all the worse when you add in the fact that Kamala was 6-foot-7, 350-pounds-plus of savage beast.

In 1982, Kamala first came into sports-entertainment when he was brought into Mid-South and World Class Championship Wrestling by the devious General Skandor Akbar. While there, he terrorized numerous opponents before leaving for WWE in 1984.

Under the tutelage of Kim Chee — and later Mr. Fuji — Kamala instantly became one of the most feared and hated Superstars WWE had ever seen. While he was unsuccessful in his quest to win the WWE Championship, the Ugandan Giant took Hulk Hogan to the limit on several occasions. Later, after falling under Fuji's employ, he formed a deadly duo with a former World Tag Team Champion, Sika the Wild Samoan. The savage pair complemented each other well, but they were unable to conquer any gold before Kamala left WWE in 1988.

He would return a few years later, this time led by Kim Chee and Harvey Wippleman; the devious Wippleman recruited Kamala for his war with Undertaker, but unfortunately, the Ugandan Giant was unable to eliminate The Phenom. After losing the first-ever Coffin Match to The Deadman at Survivor Series 1992, Kamala became the subject of much abuse and ridicule from his handlers.

Enter Reverend Slick. The good "Doctor of Style" tried to stop Wippleman & Kim Chee's abuse, reminding Kamala that he was, in fact, not a jungle savage, but a man. Eventually, his positive message got through, inspiring Kamala to turn against his captors to join the Reverend's camp. Our fans instantly flocked to the big guy, as Slick tried to teach him how to be civilized, but both men left WWE shortly thereafter. Kamala resurfaced in WCW in 1995, this time as part of Kevin Sullivan's Dungeon of Doom, brought in to destroy Hulk Hogan. However, the Ugandan Giant disappeared almost as quickly as he had returned.