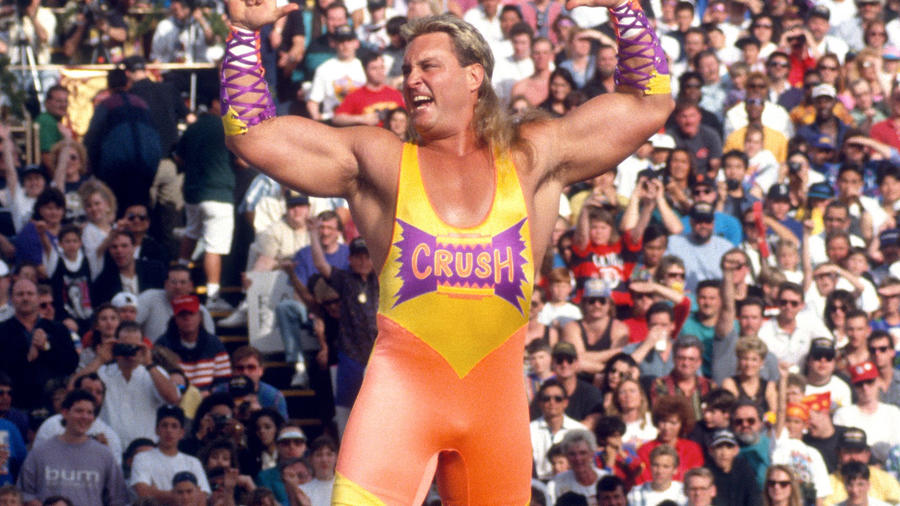 In the history of the squared circle, many competitors have betrayed their allies, had changes of heart and adopted new aspects to their persona. But no Superstar underwent as many striking transformations as the dominant force from Hawaii known as Crush.

Like a volcano on the Big Island, Crush exploded into WWE in 1990 as the bruising third member of Demolition alongside Ax and Smash. The three defended the World Tag Team Championships under sports-entertainment’s “Freebird Rule” but were defeated for the titles by The Hart Foundation due to interference from The Legion of Doom. This sparked a series of tag team dream matches against Hawk & Animal, but Demolition soon disbanded.

Crush returned in 1992 as a long-haired blond with bright neon tights, fitting for the days of Trapper Keepers and slap bracelets. Embracing his Polynesian roots, Crush became one of the most popular Superstars in WWE. But battling Crush in the ring was no luau. Opponents often fell to his devastating “Kona Crush” maneuver. At WrestleMania IX, Crush battled the evil clown Doink. During the bout, the big Hawaiian was attacked with Doink’s dangerous prosthetic arm and was assaulted by the clown’s clone, who appeared from beneath the ring. For many young fans, it was a terrifying ordeal.

After several Banzai Drops from Yokozuna put Crush out of action, he returned a changed man. No longer wearing the colorful neon tights, Crush attacked former friend Randy Savage and accused “Macho Man” of not supporting him through his recuperation. Crush began wearing dark colors and painting his face and aligned himself with the very man who was responsible for his injury, Yokozuna. At WrestleMania X in Madison Square Garden, Crush faced off with Savage in a brutal Falls Count Anywhere Match. It was the beginning of a downward spiral for the big man, whose personal demons eventually landed him in prison.

Out of the big house, Crush re-emerged in 1997 nearly unrecognizable. His hair in long braids and wearing the garb of a dangerous street rough, Crush adopted the horrifying Heart Punch as his signature maneuver and formed The Nation of Domination with Faarooq and Savio Vega. When that group split, he began running with a group of biker thugs called The Disciples of Apocalypse. D.O.A. was a WWE staple during the early part of The Attitude Era.

With WWE in a state of transition, Crush moved on and joined his peers as a member of The nWo. In the final years of WCW, he hooked up with the former Adam Bomb. Going by the name of KroniK, the duo won the WCW Tag Team Championships on two occasions. After WWE purchased WCW, KroniK joined The Alliance and faced off with the team of The Undertaker & Kane before departing WWE in 2001.