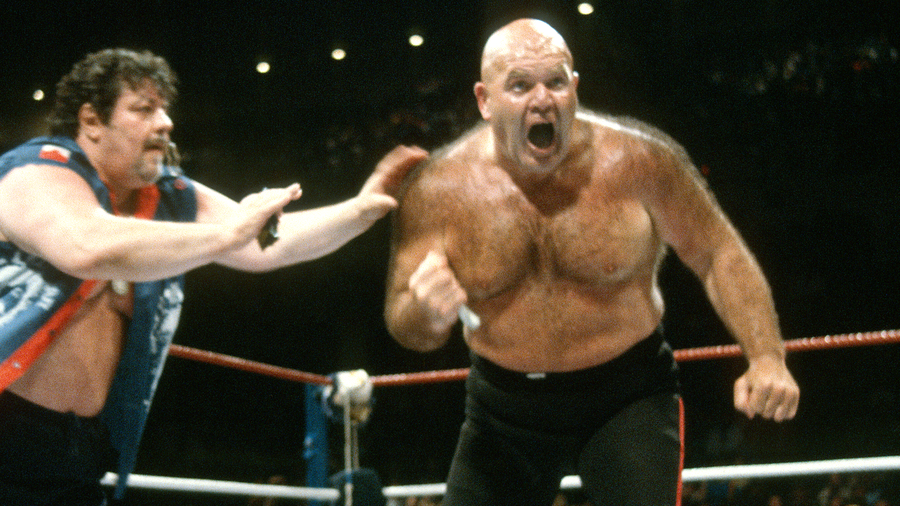 WWE has been home to some of the wildest and most unpredictable Superstars in sports-entertainment history. However, with his trademark green tongue, hairy torso and penchant for eating turnbuckles, George "The Animal" Steele might be the most unorthodox man to step foot in a WWE ring.

While he was always seen as a savage during his WWE tenure, Steele is actually a very well-educated man. Prior to breaking into sports-entertainment, Steele received his Masters Degree from Central Michigan University and became a high school teacher and wrestling coach in the Detroit area.

It was during his teaching stint that he began moonlighting in sports-entertainment, working in the Detroit-area promotions. His first WWE appearances took place in 1967, when he came to WWE and began a heated rivalry with champion Bruno Sammartino.

Both inside the ring and out, Steele lived up to his moniker; like a true animal, he was virtually impossible to contain. At times, his various managers were able to control him, but for the most part, Steele did whatever he pleased. He clawed at opponents, bit them, and used just about every illegal maneuver ever concocted. His most devastating hold, however, was his vaunted Flying Hammerlock, which could separate an opponent's shoulder in mere seconds. The looks of pain on his foes' faces when he applied the hold remain among the most indelible impressions in the mat game's history.

In a sport where speaking skills sometimes overshadow athletic ability, it's a testament to Steele that he had such an impact without talking. This is not to say that he didn't use his mouth, of course. When he wasn't biting his opponents, he could often be seen eating turnbuckles, much to the amusement of the fans. His opponents would then be summarily tossed headfirst into the exposed steel bolt that secured the ropes to the ring post.

For nearly 20 years, Steele was a hated rule-breaker, managed by the likes of fellow Hall of Famers The Grand Wizard, "Classy" Freddie Blassie, Capt. Lou Albano and Mr. Fuji. While he never captured a championship, his classic rivalries with Bruno Sammartino, Gorilla Monsoon, Pedro Morales and Bob Backlund saw him come close on numerous occasions.

In 1985, however, Steele became a fan-favorite and changed the course of his career. After The Iron Sheik & Nikolai Volkoff abandoned him during a match, Steele fell back under the tutelage of the then-beloved Albano. His transformation was remarkable, as one of the most hated men in the sport became one of its most beloved figures.

Just when many thought Steele's career might be winding down, he once again rose to prominence. He developed a crush on Miss Elizabeth and feuded with her charge "Macho Man" Randy Savage, nearly capturing the Intercontinental Championship in 1986. While he was unable to win the gold, he would cost Savage the title in 1987; during Savage's famous bout with Ricky "The Dragon" Steamboat at WrestleMania III, Steele shoved Savage off the ropes, preventing him from driving the ring bell into the challenger's throat. Moments later, Steamboat pinned Savage to end the "Macho Man's" reign.

Shortly thereafter, Steele gained a new "friend" named Mine, a stuffed animal with a hairy torso and bald head just like "The Animal." Unfortunately, Steele and Mine faded away soon after. Nearly a decade later, however, "The Animal" had one last run in WWE when he came out of retirement to be a part of The Oddities -- a fitting return if ever there was one.

In 1995, Steele received the ultimate honor when he was inducted into the WWE Hall of Fame by Doink the Clown. His induction featured a cameo video appearance by actor Bill Murray, with whom Steele appeared in the 1994 film Ed Wood (Steele played Tor Johnson). Also in 1995, Steele was inducted into the Michigan High School Coaches Hall of Fame based on his accomplishments prior to his sports-entertainment days.

Since Steele left WWE, his legend has only grown. He remained one of the most recognizable men outside sports-entertainment until he sadly passed away Feb. 16, 2017, though his very name still evokes terror on one hand and sympathy on the other. Steele captured the spotlight, and of all the unusual people who have plied their trade in WWE, he is truly one of a kind.