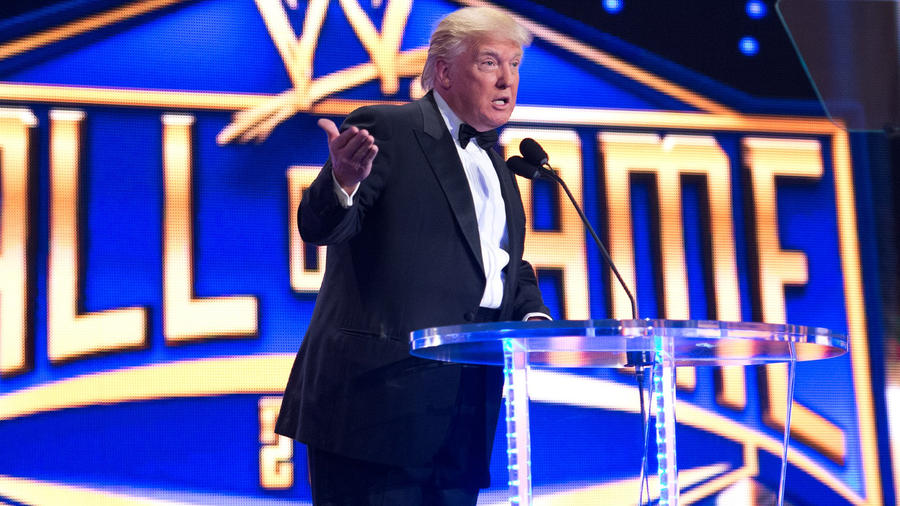 From captivating billionaire to reality TV star, from WWE Hall of Famer to the 45th President of the United States, Donald J. Trump has truly done it all.

As one of the most famous men in the world, Trump has been recognized as an innovator of real estate, politics and reality television. And how could you miss him? The Donald’s surname — synonymous with wealth and power — has been emblazoned in giant gold letters across skyscrapers and high-rises in the biggest cities in the world. But long before he stepped into the Oval Office, Trump was helping to shape the future of the squared circle. In fact, he had been making a consistent impact on WWE since the days when Andre the Giant was still king.

The Donald’s Trump Plaza in Atlantic City, N.J. hosted both WrestleMania IV and WrestleMania V — the only venue to present The Show of Shows two years in a row. Since those unforgettable nights, Trump has remained a familiar face in the front row of WWE events, but it wasn’t until 2007 that the billionaire got in on the action.

In January of that year, The Donald interrupted Mr. McMahon’s “Fan Appreciation Night” on Raw and dropped tens of thousands of dollars from the rafters of the arena onto the WWE fans below. Red-faced that a rival would steal the spotlight from him, Mr. McMahon challenged Trump to a “Battle of the Billionaires” at WrestleMania 23 with the stipulation that the loser of the bout would have his head shaved bald.

A record number of viewers tuned in to watch The Donald back Bobby Lashley to victory over Mr. McMahon’s Umaga and subsequently shave the WWE Chairman’s signature mane in the center of the ring.

The business magnates locked horns again in June 2009 when Trump purchased Monday Night Raw and immediately announced that next week’s show would air commercial-free and that every WWE fan that who purchased a ticket would be given a full refund. The trademark Trump public relations flourish nearly made Mr. McMahon’s head explode and forced him to buy his show back from The Donald for twice the price.

After trading in his favorite television catchphrase “You’re fired!” for a national promise to “Make America Great Again,” Donald Trump won his first presidential campaign against key contender Hillary Clinton and officially took the oath of office on Jan. 20, 2017 to become the 45th President of the United States — the first time in history a WWE Hall of Famer would ever hold the distinguished title of U.S. Commander-in-Chief.