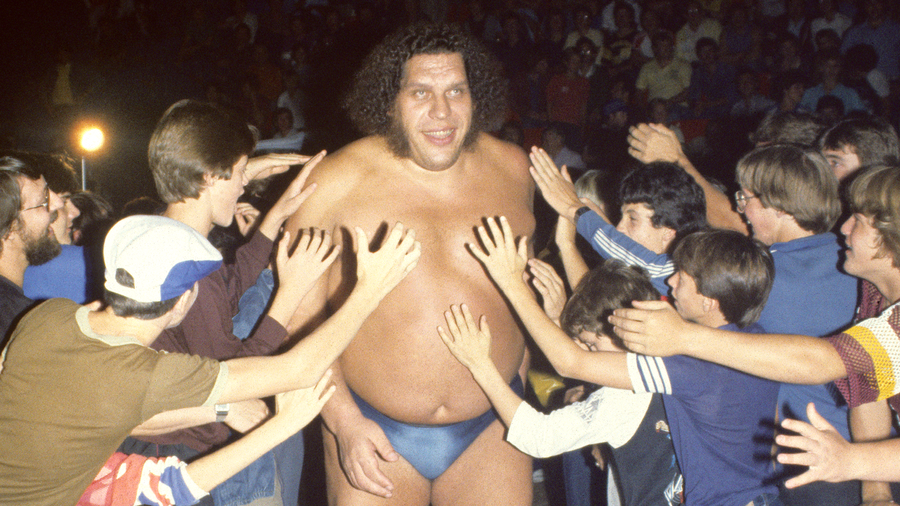 In WWE, there have been many Superstars who are larger than others, but Andre the Giant has proven to be larger than WWE itself. Throughout the ’70s and well into the ’80s, the so-called “Eighth Wonder of the World” was the company’s leading attraction, towering over the competition at seven feet, four inches and tipping the scales at a gargantuan 500-plus pounds.

Raised in a small French farming village, Andre lived a quiet, pastoral life as a child. However, his size was an issue almost from the start. Born with acromegaly, a disorder that causes bones to grow at an accelerated rate, Andre stood 6-foot-3 and weighed 200 pounds by the time he was 12 years old.

His size having grown to abnormal proportions, Andre opted to turn his situation into something positive, entering the wrestling world at the relatively young age of 18. In those days, the sport was still a regional attraction, and yet Andre managed to captivate audiences wherever he went and become a fan favorite in every territory.

After making an impact in Japan and Canada, the 27-year-old giant was taken under the wing of Vincent McMahon Sr. in 1973. Andre spent the next 20 years with WWE, even going so far as to turn down a contract from the NFL’s Washington Redskins in order to remain with the promotion.

In WWE, Andre’s already-burgeoning career caught fire. He blazed through WWE on an unprecedented winning streak, remaining undefeated for nearly 15 years. Throughout heated rivalries with such Superstars as "Big Cat" Ernie Ladd, Blackjack Mulligan and even Hulk Hogan (whom Andre defeated in an epic clash at Shea Stadium in 1980), no one could overpower the giant.

Beyond his undeniable prowess in the ring, Andre also enjoyed massive crossover success the likes of which would not be seen again until The Rock dominated Hollywood starting in 2002. During the ’70s, he made a number of guest appearances on TV, including “The Tonight Show” and “The Six Million Dollar Man” (where he played, of all things, Bigfoot). But perhaps his most famous role was in 1987 when he played the gentle-hearted giant Fezzik in Rob Reiner’s smash hit comedy “The Princess Bride.”

As the ’80s wore on, Andre was still an integral part of WWE’s national expansion. During the early part of the decade, he battled against Big John Studd, a rivalry that reached its zenith at the first WrestleManiain 1985 when Andre and Studd met in the Body Slam Challenge, which Andre won. The following year, he took part in the Chicago portion of WrestleMania 2, winning the NFL vs. WWE Battle Royal, and adding to his record for most Battle Royals won.

In 1987, Andre shocked the world when he turned on long-time ally Hulk Hogan and allied himself with the villainous Bobby “The Brain” Heenan. The Brain scored Andre his first-ever opportunity at the WWE Championship at WrestleMania III. In front of 93,173 WWE fans in Pontiac, Michigan, Andre’s 15-year winning streak ended when Hulk Hogan slammed him to the mat in a torch-passing moment that ignited a new era in WWE history.

After chasing the title for nearly a year, Andre at long last finally won the WWE Title but immediately surrendered it to Ted DiBiase. The controversial move set the stage for the first-ever WWE Championship tournament, held in Atlantic City, N.J., at WrestleMania IV.

Andre continued to experience success in his waning days in WWE, winning the World Tag Team Titles with Haku in 1990, which was the last title he would ever hold. After losing the tag championship gold at WrestleMania VI, Andre finally turned against Heenan, once again putting himself in the crowd's favor. The Eighth Wonder of the World made several cameo appearances over the next few years, but on Jan. 28, 1993, Andre the Giant quietly passed away in his sleep in Paris, France.

One year after his passing, Andre was honored by his peers as the first inductee in the newly founded WWE Hall of Fame – a fitting end to a career of a Superstar so great, so monumental, and so larger-than-life itself, that his massive footsteps are permanently imprinted on the WWE Universe.