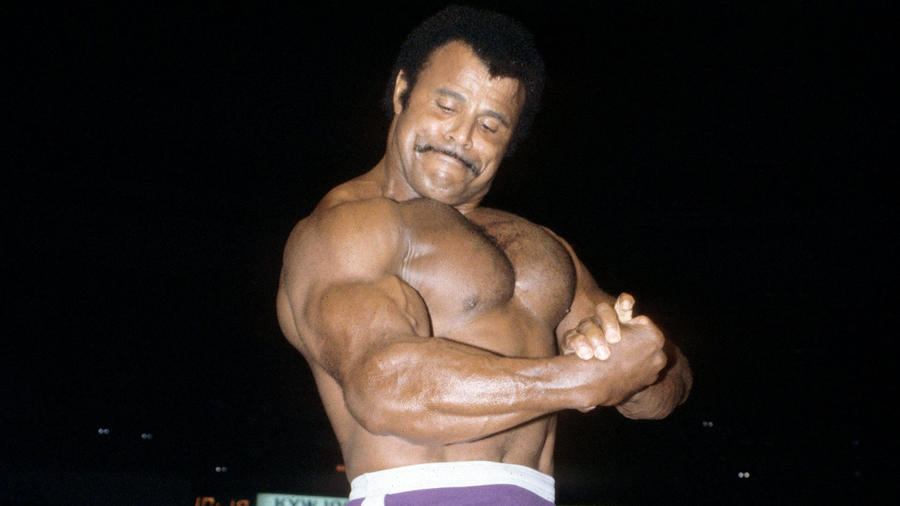 A former boxer, Johnson turned to a career in sports-entertainment in the mid-1960s. He was trained by a man who would later become his father-in-law -- the legendary High Chief Peter Maivia. The High Chief was himself a "blood brother" of the even more legendary Anoa'i Samoan wrestling dynasty, so when Johnson married Peter's daughter, Ata Maivia, he became a part of that dynasty.

Johnson debuted in 1966 and competed all around the world before settling in the NWA in the 1970s. He won several regional NWA singles and tag team titles in his tenure there, but was unable to unseat either Harley Race or Terry Funk for the NWA World Championship.

In 1983, Johnson came to WWE where he struck up a partnership with "Mr. USA" Tony Atlas. Together, the pair made an immediate impact. On Nov. 15, 1983, they made history by defeating two members of Johnson's "family" -- Afa & Sika, the Wild Samoans -- and becoming the first African-Americans to win the World Tag Team Championship. Their reign may have only lasted six months, but the significance of their victory will live on forever.

Johnson left WWE shortly after he and Atlas lost the gold, but that would not be the end of the Johnson/Maivia dynasty. In 1972, Rocky and Ata Johnson had a son, Dwayne, who would go on to become the Most Electrifying Man in Sports-Entertainment, The Rock!

Rocky Johnson had a hand in training his son to follow in his footsteps and was often seen by The Rock's side after his late-1996 WWE debut. If things got hairy enough, Johnson wasn't afraid to jump in the ring and help his third-generation progeny fend off attacks from multiple foes. A few years later, Johnson also helped train other future Superstars during a short stint working for WWE.

In 2008, The Rock was able to give something back to his father, helping to recognize his accomplishments in sports-entertainment by inducting him into the WWE Hall of Fame.

To some, he's known for being one of the greatest Superstars in WWE history; to others, he's known for being the son-in-law of the famed High Chief or the father of The Rock. However, as a pioneer and the first African-American to win coveted World Tag Team gold, Rocky Johnson will always be known as a legend and a trailblazer.