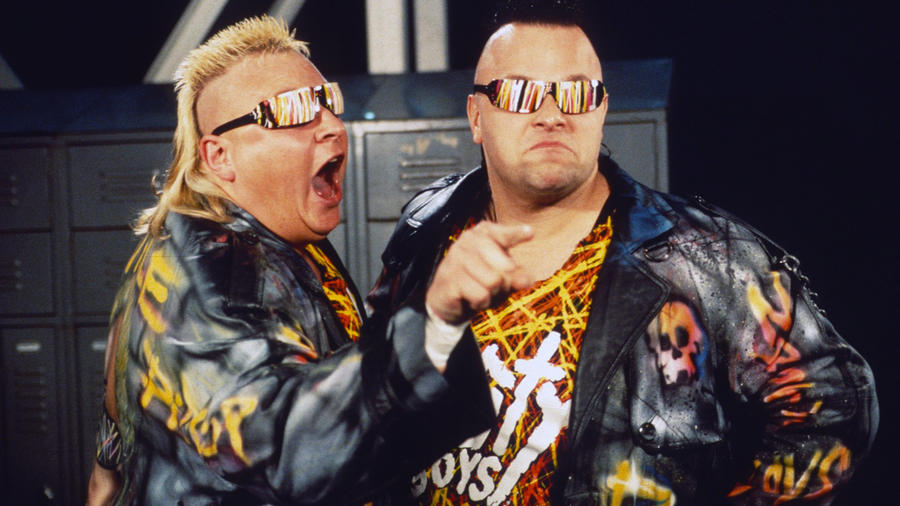 Before The Sandman crushed a beer can against his forehead, before Crash Holly wrestled at airport baggage claims, even before Mick Foley fell off the roof of Hell in a Cell, hardcore intensity was defined by two mohawked thugs from Allentown, Pa. — The Nasty Boys.

No tag team in sports-entertainment history was as hard-hitting, unpredictable and just plain nasty as Brian Knobbs and Jerry Sags. The sweaty, toothless punks brawled their way around the country in every major wrestling organization. It was never pretty, but The Nasty Boys always got the job done.

In 1985, The Nasties joined AWA and quickly began a heated rivalry with a young Shawn Michaels and Marty Jannetty, known then as The Midnight Rockers. The smash-mouth style of Knobbs and Sags, combined with the high-flying panache of Michaels and Jannetty resulted in a series of unique matchups that solidified each duo as forces to be reckoned in any tag team division.

After The Nasty Boys were unable to capture the AWA Tag Team Titles from The Midnight Rockers, they landed in Eddie Graham’s hallowed Championship Wrestling from Florida. In just one year, the beefy hooligans won the Florida Tag Team Championships on five occasions. After a brief stop in WCW, The Boys finally took their shades and leather trenchcoats to WWE.

Alongside their manager, Jimmy Hart, Knobbs and Sags immediately announced their intention to “nastycize” any team that crossed their path. Team after team would be sent on a terrifying Trip to Nastyville — the devastating combination of a powerslam by Knobbs, immediately followed by a diving elbow drop from Sags. Only six weeks after their debut, The Nasty Boys outlasted legendary pairs like Legion of Doom, Demolition and their old rivals The Rockers to win a Tag Team Battle Royal on an edition of Superstars. The victory earned The Nasties the right to challenge for the World Tag Team Championships at WrestleMania VII.

On The Grandest Stage of Them All, The Nasty Boys shockingly unseated The Hart Foundation in Los Angeles to win the titles, completing a swift and meteoric rise to the top of sports-entertainment’s tag team ranks. Their coast-to-coast championship odyssey ended at SummerSlam when they were defeated by Legion of Doom in a clash of powerhouses in New York City.

In 1993, The Nasties took their gnarly antics to WCW where they clobbered teams like Harlem Heat, Public Enemy, The Outsiders and The Steiner Brothers in matches that were a far cry from anything resembling traditional mat grappling. Using everything from the stench of their armpits to garbage cans, Knobbs and Sags knocked out their opponents during their three reigns as WCW Tag Team Champions. When Sags retired from in-ring competition, Knobbs became a natural fit in WCW’s Hardcore Division and won the WCW Hardcore Title on three occasions, a record for that championship.

Over the course of a 15-year ring career, the two tough degenerates crushed skulls in squared circles around the country. No duo was safe from the vile tactics employed by The Nasty Boys.