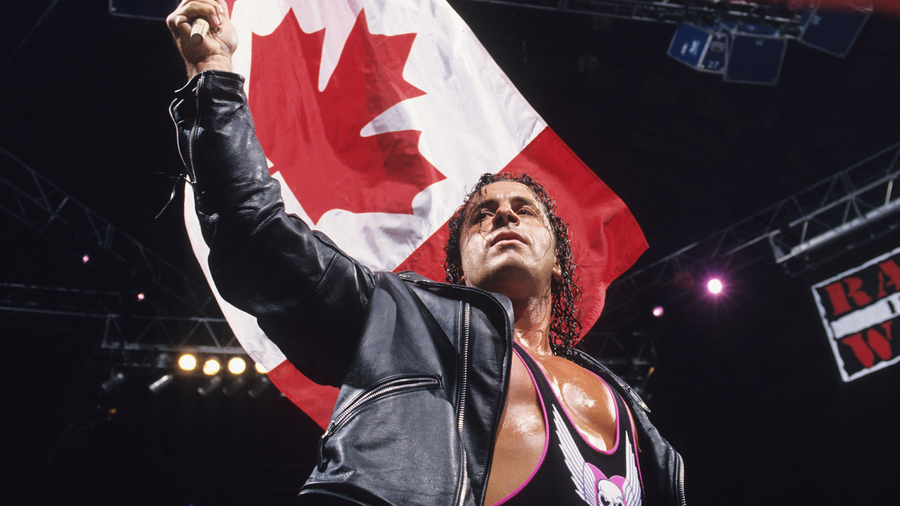 Reverently described as The "Excellence of Execution" and trained in the storied Hart Family Dungeon, Bret Hart is arguably the greatest technical wrestler in WWE history.

Hart found beauty in the wrestling simplicity. Clad in pink and black tights, he strode to ring against the whirr of an electric guitar, pausing only to gift his trademark shades to a small child waiting ringside. Inside the ring, he wasted no movement, systematically focusing on his opponents’ weaknesses until they were too tired to endure his patented Sharpshooter submission. He was also an innovator of offense and possessed an uncanny ability to create pinning combinations out of seemingly any predicament.

Hart emerged from Calgary's Stampede Wrestling, coming to WWE as a tag team with his brother-in-law, Jim "The Anvil" Neidhart. Together, The Hart Foundation won the World Tag Team Titles twice and became one of the most popular pairings in WWE.

From there, The Hart Foundation separated, and Bret became and instant sensation as a singles star. He defeated Mr. Perfect for the Intercontinental Championship in August 1991 and became a two-time holder of the title at WrestleMania VIII, where he defeated “Rowdy” Roddy Piper in a memorable clash.

Hart won his first WWE Championship in a non-televised live event in Saskatoon, Saskatchewan, Canada, forcing Ric Flair to submit to the Sharpshooter. It began the first of five WWE Title reigns for the man who boldly declared, "I'm the best there is, the best there was, and the best there ever will be."

The win began a stellar run for The Hit Man. He won King of the Ring in 1993, the Royal Rumble in 1994 and defeated Yokozuna for the WWE Title at WrestleMania X. At the time, he also began a well-documented rivalry with Shawn Michaels, which would lead to one of the biggest matches in WrestleMania history — WrestleMania XII’s Iron Man Match as well as the most infamous moment in WWE history, The “Montreal Screwjob.”

It was the 1997 Survivor Series, and Hart was scheduled to leave WWE for rival WCW while embroiled in a dispute with Mr. McMahon over the fate of the WWE Title. That evening, Shawn Michaels administered the champion’s own Sharpshooter, referee Earl Hebner called for the bell and HBK was awarded the WWE Championship. On the wrong end of a well-devised conspiracy, The Excellence of Execution was furious and left WWE dejected.

In WCW, Hart never attained the same level of success he enjoyed in WWE. A severe injury suffered in 2000, coupled with a stroke in 2002 forced him to retire from fulltime in-ring competition.

The wounds left from the Montreal incident appeared incurable, but Hart surprisingly returned to WWE in 2010. While he achieved closure with HBK, he also reignited an unsettled, personal rivalry with McMahon, culminating with Hart's return to action at WrestleMania XXVI where The Hit Man, flanked by many members of his family, finally confronted his biggest enemy.

Hart defeated his nemesis in brutal fashion, finishing the final chapter of a Hall of Famer career, worthy of being called “the best there ever will be.”