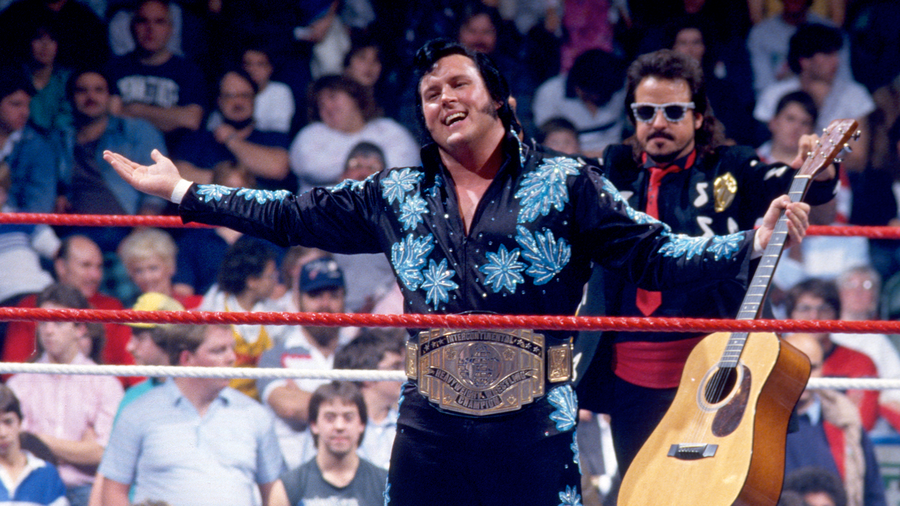 Though he may have resembled one of the most famous musicians of all time, The Honky Tonk Man would be the first person to tell you that Elvis Presley couldn’t shine his shoes, both in the ring and in the recording studio. With his hair perfectly slicked back, Colonel Jimmy Hart in his corner and his trusty guitar always within reach, he was one of the sneakiest Superstars in WWE history, holding the Intercontinental Title for 454 days, a record that stands to this day and earned the grappler a spot in the WWE Hall of Fame.

Surprisingly, The Honky Tonk Man wasn’t always so cool, cocky, and bad. First boogying into WWE in 1986, he smiled and high-fived the WWE Universe all along the way. Honky had the stamp of approval from WWE Champion Hulk Hogan, who believed the sideburned Superstar would be a bona fide chart-topper inside the ring. The WWE Universe, however, didn’t share Hogan’s faith and relentlessly jeered the Elvis-like combatant.

Soon, Honky Tonk Man begged the WWE Universe for a vote of confidence. When the results came back overwhelmingly negative, he turned his back on WWE's fans, which may have been just what the doctor ordered. Adding Jimmy Hart as his manager, Honky hit the studio to lay down vocals on his own entrance music and showed a new confidence in the ring. After dispatching his opponents, he would often subject crowds to his singing, disingenuously thanking them for “being a beautiful audience.”

The Honky Tonk Man’s dastardly side helped him rack up victory after victory, earning him a title opportunity against Intercontinental Champion Ricky "The Dragon" Steamboat. Honky used the ropes for leverage to pull off what is still considered one of the greatest upsets in sports-entertainment history. Almost immediately after winning the title, he declared weekly that he was the greatest Intercontinental Champion of all time. While that may not have been the case during his reign’s infancy, he built a solid argument by holding on to the title for 454 days.

Honky, by hook or by crook, kept a tight hold on the Intercontinental Championship for nearly 13 months, which no Superstar before or after has come close to. The Ultimate Warrior put an end to The Honky Tonk Man’s reign at SummerSlam 1988 in under a minute when Honky issued an open challenge. After losing the title, he formed the tag team 'Rythym and Blues"with Greg Valentine, who dyed his trademark blond locks to jet black. The pair had a single, “Hunka Hunka Honky Love,” that allegedly went gold before their breakup in late 1990.

The Honky Tonk Man left WWE in 1991, but has been known to pop up in WWE from time to time, whether as the manger for Rockabilly or reappearing in 2008 to show then-Intercontinental Champion, Santino Marella that he was still the greatest to hold the title via a guitar to the face. In 2019, The Honky Tonk Man was given WWE's greatest honor, induction into the WWE Hall of Fame