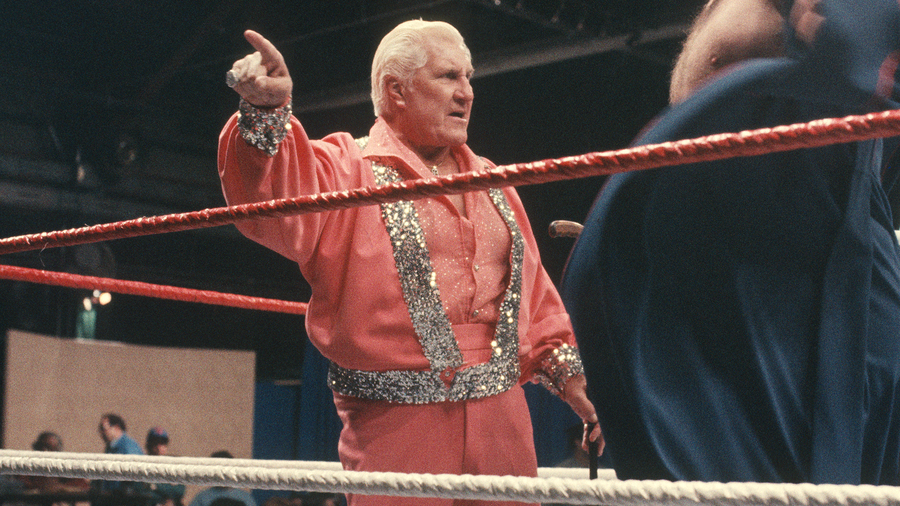 "Classy" Freddie Blassie is one of the most memorable Superstars to ever set foot inside the squared circle. Whether as a wrestler, a manager or a fashion plate, Blassie's legacy all comes down to having one important trait: He could make anyone hate him in an instant. And boy, did he ever.

The unpopular Superstars of today may be subjected to loud boos, some name-calling and the occasional mocking sign in the crowd, but none of them may ever experience the repercussions that Blassie did thanks to his villainy. While one would think that frequent death threats, 21 stab wounds and an acid dousing by irate fans would encourage an individual to change vocations, for Blassie the experiences did not deter him from his passion -- competing in the ring and gaining incredible attention for doing so.

Blassie developed his toughness from growing up in a working-class neighborhood in south St. Louis. While he was pushed toward all sorts of different careers, it was sports-entertainment for which Blassie developed a passion; from the age of 17 on, Blassie was almost always in the ring.

He officially began his career in 1935, working his way up from the preliminary ranks in Missouri. Blassie joined the Navy during World War II, which interrupted his career only briefly; upon his discharge from the military in 1946, he returned to his chosen profession, one he would leave his mark on for the next 40 years.

Throughout the 1950s, Blassie dominated the southeastern United States, racking up numerous regional championships. Although he never claimed a World Championship, he gave some of the greatest World Champions of all time -- including Lou Thesz and Pat O'Connor -- a run for their money.

Moving out west in the 1960s, Blassie continued his dominance. He was so hated in California at the time that he frequently needed full security from uniformed police officers just to get to the arenas. In that decade, however, Blassie once again racked up numerous regional titles on the West Coast, and if he wasn't hated enough already, he became truly reviled after a particularly brutal attack on Japanese Superstar Rikidozan in 1962. Allegedly, the sight of one of their national heroes covered in his own blood caused many Japanese fans to suffer heart attacks.

Upon returning to the United States, Blassie made his way to WWE. He had previously spent a short time in WWE in the mid-1960s -- challenging Bruno Sammartino for the WWE Championship on numerous occasions -- but it became his permanent home in 1970. Managed by Captain Lou Albano, Blassie once again challenged for the WWE Championship but couldn't unseat Pedro Morales for the gold.

In 1974, Blassie ended his in-ring career and became one of the most successful managers of his time. It was at this point in his career that he became known as the "Hollywood Fashion Plate," renowned for going to ringside dressed in the loudest of outfits and using his equally loud voice to mock others as "pencil-necked geeks."

Over the next decade, Blassie managed numerous Legends and future Hall of Famers, including High Chief Peter Maivia, Jesse "The Body" Ventura, Mr. Fuji and George "The Animal" Steele. He also managed Muhammad Ali during his 1976 bout against Antonio Inoki, and even guided the career of Hulk Hogan for a short time during Hulk's first WWE tenure in the late-1970s and early 1980s.

Perhaps his most successful run as a manager, however, came while helming the careers of Nikolai Volkoff & Iron Sheik. Touting himself as "Ayatollah" Blassie, the "Classy" one led Sheik to the WWE Championship in 1983 -- a title he would quickly lose to former Blassie protégé Hulk Hogan only weeks later. In 1985, Blassie led Volkoff & Sheik to the World Tag Team Championship, as they defeated Barry Windham & Mike Rotundo on the first WrestleMania card.

During his managerial career, Blassie's charisma carried him into several outside ventures as well. In 1975, he lent vocals to a pair of songs recorded by Johnny Legend -- including one aptly titled "Pencil Neck Geek" -- and in 1982, he was the subject of Andy Kaufman's documentary film My Breakfast with Blassie.

In 1986, however, Blassie's career came to an official end. After bringing Slick to WWE and selling half interest in his stable of wrestlers to the "Doctor of Style," Blassie finally gave full control to his protégé and retired after over 50 years of entertaining.

Despite failing health in his later years, Blassie would occasionally appear on WWE programming. This time, however, our fans softened their previously harsh stance on the "Fashion Plate," rabidly cheering the Legend when he would appear. In 1994, he was recognized for his half-century of greatness by being inducted into the WWE Hall of Fame by Shane McMahon. Two years later, he received a Lifetime Achievement Award at the 1996 Slammy Awards.

Sadly, "Classy" Freddie Blassie's final WWE appearance came in May 2003, when he appeared on Raw to promote his autobiography, "Listen, You Pencil Neck Geeks" -- which became an instant bestseller. On June 2, Blassie passed away due to heart and kidney failure at the age of 85.

While he may be gone, "Classy" Freddie Blassie will never be forgotten. He was one of the most despised Superstars the world has ever seen, but in his wake he left behind a legacy of greatness that may never be equaled, and he will forever be known as a true Legend of sports-entertainment.