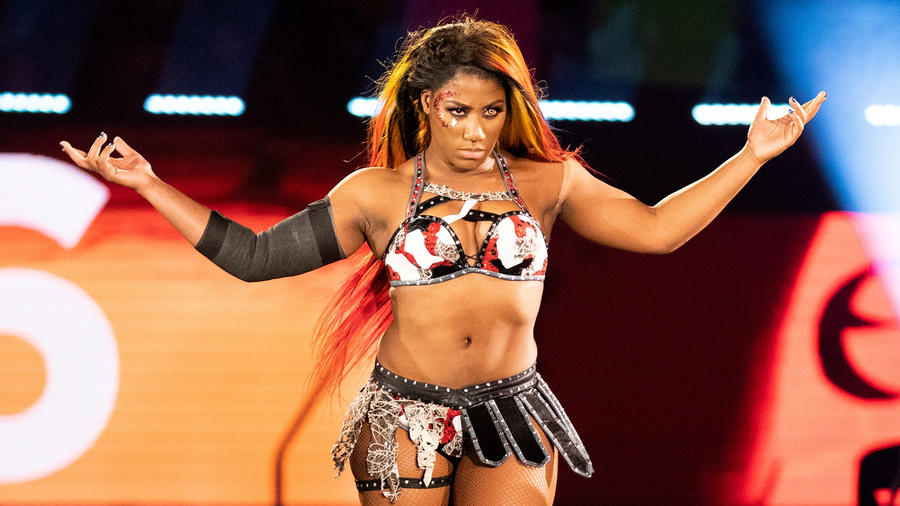 Ember Moon’s rapid ascension up the ranks of WWE is owed to the three attributes that she says define her best: Skill, honor and heart. The War Goddess has exemplified each of those since taking WWE by storm.

Born in Garland, Texas, Moon first fell in love with sports-entertainment thanks to her grandfather’s influence. Together, they bonded over watching Dallas’ favorite sons, The Von Erichs, battle nefarious black hats from the famed Sportatorium, and from there, Moon’s path to the ring was never in question.

Mentored by WWE Hall of Famer Booker T, Moon quickly emerged as a dynamic competitor between the ropes. She fought tirelessly to earn a spot in WWE NXT, and by the time she debuted in August 2016 at TakeOver: Brooklyn II, it was clear Moon was already able to hang with the world’s most elite Superstars. The War Goddess was the first woman to pose a legitimate challenge to the then-undefeated Asuka, with Moon’s breathtaking signature move, the Eclipse, even appearing to create self-doubt in The Empress of Tomorrow.

She endured several heart-wrenching setbacks in her pursuit of the NXT Women’s Title, including untimely injuries and just plain bad breaks, but Moon took the throne in November 2017 and became the face of NXT’s renowned Women’s division.

One night after WrestleMania 34, The War Goddess debuted on Monday Night Raw, teaming with new Raw Women’s Champion Nia Jax and dropping Alexa Bliss with the Eclipse to defeat the former champion and Mickie James.

Moon missed significant time due to an injury, and after several weeks of videos that showed a mysterious motorcycle rider, Moon drove to the arena and hit the stage after Io Shirai defended the NXT Women's Title and unmasked to signify her return to NXT! Moon later formed a daredevil tag team alongside Shotzi Blackheart, and the impressive duo soon captured the NXT Women's Tag Team Titles.