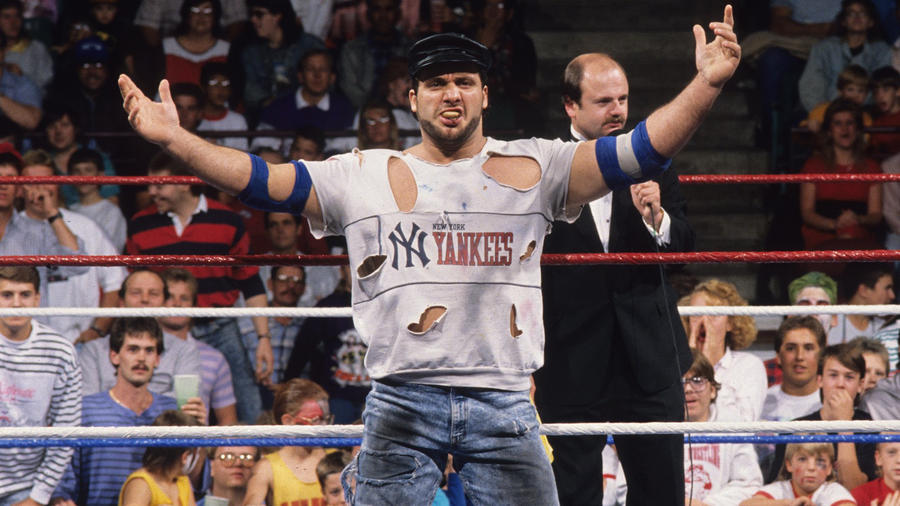 A hardened fighter from the mean streets of New York City, The Brooklyn Brawler was one of WWE’s roughest and most enduring competitors.

WWE Hall of Famer Bobby “The Brain” Heenan introduced the WWE Universe to The Brawler in 1989, vowing that he could make anyone into a star. He certainly had his work cut out for him. Clad in a torn, stained New York Yankees shirt and dirty jeans that had to have been fished out of a dumpster, the unkempt Brooklyn Brawler came to the ring looking like a bum off the streets of his home borough rather than a Superstar.

Once the bell rang, however, The Brawler hit harder than an F train. Armed with his trademark Sidewalk Smash maneuver, he tossed his unlit cigar aside and did his best to emerge victorious, though he often ended up with his shoulders on the mat.

Frustrated with his lack of progress, Heenan dumped Brooklyn Brawler by summer, leaving the tough New Yorker to navigate the ranks of WWE by himself. During his time in WWE, The Brawler took on a veritable who’s-who of Superstars, Legends and WWE Hall of Famers, including Shawn Michaels, The Undertaker and Big Show.

Perhaps his greatest success as a WWE Superstar came in July 2000. Triple H thought he was in for an easy night when he learned he was facing Brooklyn Brawler and Kaientai in an Elimination Handicap Match. The Game quickly dismissed Taka Michinoku and Funaki and looked to be on his way to a quick win, when The Brawler surprised him and picked up a victory! He may have had a little help from Chris Jericho, but we won’t hold that against the Brawler.

It was a well-deserved victory for the lovable lug, but the best was yet to come. More than 12 years after that unlikely result, the slovenly Superstar stole the show at WWE TLC 2012 as he competed before his hometown crowd at the first pay-per-view in WWE history to be held in Brooklyn. The Brawler showed no signs of ring rust alongside The Miz & Alberto Del Rio and ultimately applied the Brooklyn-influenced Boston Crab to cement another unbelievable win.

Though he may not have held the most impressive win-loss record in WWE history, The Brooklyn Brawler’s gruff personality and his longevity endeared him to generations of WWE fans.