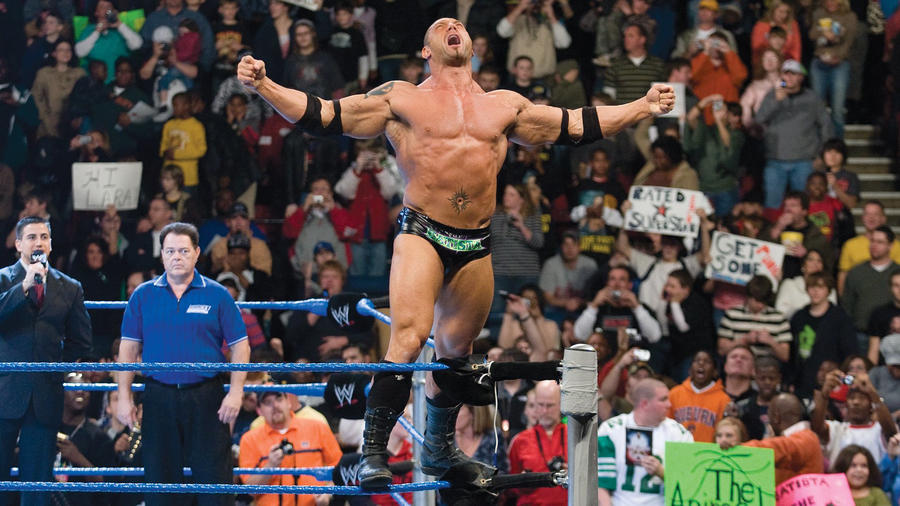 Taming wild animals is best left to trained professionals. Taming “The Animal” is another matter entirely.

If Batista always appeared in control of his meteoric rise through the ranks of WWE, that’s because you’re not counting his tempestuous formative years. What would ultimately bring the 6-foot-6, 290-pound brute to the top was his ability to avoid the perils and violence all around him in his troubled youth.

He didn’t ask to be born into a rougher part of Washington, D.C., which delivered three early reality checks in the form of homicides committed on his parents’ front lawn. He cannot undo becoming estranged from his parents by age 17 or the assault charges he accrued and probation he served for unleashing his ferocious temper on two unruly patrons at a club where Batista worked as a bouncer.

But rather than let his past pull him down, Batista rose above it by setting a goal of becoming an athlete and entertainer. He trained under Afa at the Wild Samoan Training Centre in Allentown, Pa. and redoubled his efforts after a WCW scout told Batista he’d never make it — only to find himself thriving in the independent circuit shortly thereafter. Two years later, WWE finally came calling.

And in 2002, Batista answered that call in a beastly way. With a bit of refinement from Evolution colleagues Triple H and Ric Flair, The Animal developed from a self-described “muscleheaded goofball” to a six-time World Heavyweight Champion. His first World Heavyweight Championship win came at the expense of Triple H at WrestleMania 21 and lasted 282 days, which still stands as a WWE record for longest single reign in that title’s history. His resume includes winning two Royal Rumble Matches, handing Triple H his first loss in a Hell in a Cell Match at Vengeance in 2005, and wins over The Undertaker, John Cena and Randy Orton.

Batista departed WWE in 2010, but returned in January 2014 and immediately won the 30-Man Royal Rumble Match to earn a WWE World Heavyweight Title opportunity at WrestleMania 30. The Animal tapped out to Daniel Bryan in the Triple Threat main event, but the loss did little to curb his ego. In the weeks that followed, the arrogant Batista realigned himself with Triple H and The Viper in a reformation of their Evolution grouping. Together, the trio looked to take out The Shield.

However at Extreme Rules, Evolution was ultimately defeated in a showdown with The Hounds of Justice — an incredible battle between two of the most dominant factions in WWE history. Then, at WWE Payback, Rollins, Ambrose & Reigns shut out all three members of the legendary faction in a brutal No Holds Barred Elimination Match.

One night later on Raw, frustrated that he never got the one-on-one WWE World Heavyweight Championship Match he earned by winning the 2014 Royal Rumble Match, Batista abandoned his Evolution associates and quit WWE.

Five years later, Batista returned to Raw and shocked the world by attacking Ric Flair before The Nature Boy's birthday celebration. The heinous act was a ploy to goad Triple H into a showdown at WrestleMania 35, which The Game ultimately accepted. Batista sought to end his career on his terms — and end Triple H’s career while he was at it — but Big Dave was ultimately defeated by Triple H in a brawl that proved a worthy farewell for a man they called The Animal.