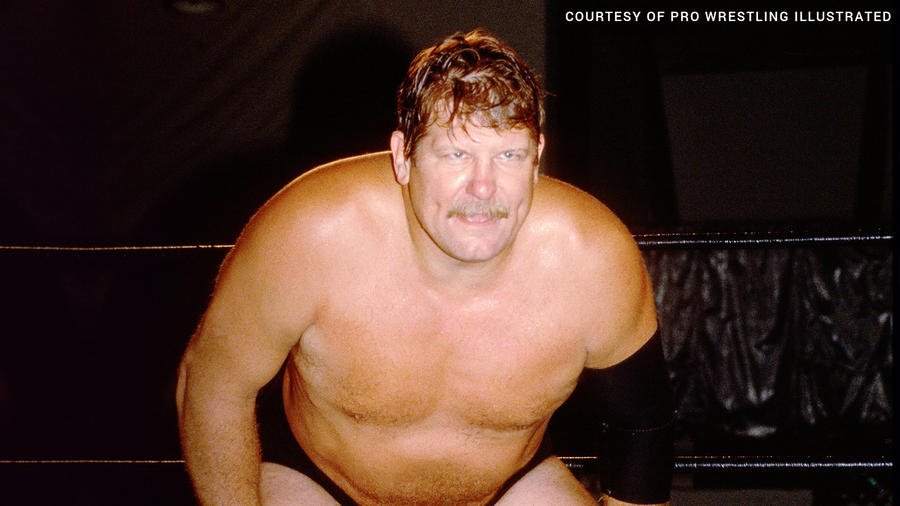 He had a scowl on his face, a bullrope in his hand and tobacco dripping from his lip, but Stan Hansen was no ordinary cowboy. The Bad Man from Borger, Texas was a wild bucking bronco who became one of professional wrestling’s most revered international competitors during a career that spanned three decades from WWE to The Land of the Rising Sun and earned Hansen a spot in the WWE Hall of Fame

A collegiate football standout, Hansen attended the fabled West Texas State University, an institution that produced no fewer than a dozen ring greats. It was there that the big Texan met lifelong friend Bruiser Brody, with whom Hansen would travel the world competing in the squared circle. Soon after going pro, The Bad Man from Borger joined WWE in 1976.

Two months after his debut, Hansen made his first appearance in Madison Square Garden when he challenged Bruno Sammartino for the WWE Championship. And he made the most of it. The vicious cowboy unleashed a brutal clothesline that broke the champion’s neck — a move that quickly defined him as The Lariat. That summer, Bruno returned to the ring to battle his rival in the main event of a supershow at New York City’s Shea Stadium in front of 32,000 fans.

Following his tenure in the northeast, the unapologetically sloppy brawler arrived in Japan. Hansen quickly became one of the nation’s most notorious gaijins by becoming the first foreigner to defeat both Antonio Inoki and Giant Baba. Although he was nearly blind, the six-foot-four, 320-pounder ran roughshod over the country’s two major organizations — New Japan Pro Wrestling and All Japan Pro Wrestling — both solo and as a part of formidable tag teams with Bruiser Brody, Terry Gordy and Genichiro Tenryu and famously brawled with the great Andre the Giant.

Now solidified as a major international star, Hansen returned to the States and defeated Rick Martel for the AWA Championship at the Meadowlands in New Jersey. But upon being forced to defend the title against WWE Hall of Famer Nick Bockwinkel, Hansen took the title hostage back across the Pacific and began defending it there. The champ was informed that he had been stripped of the AWA Championship and mailed the title back, but not before running it over with his truck. It arrived badly bent, complete with mud tracks.

By the 1990s, The Lariat was a veteran renowned for his savage and merciless brawling style. In the early part of the decade, Hansen popped out Big Van Vader’s eyeball, defeated Lex Luger for the United States Championship and engaged in a bitter rivalry with Japanese legend Mitsuharu Misawa. At the turn of the millennium, Hansen hung up the cowbell and 10-gallon hat for good, but few competitors made an impact across the globe quite like The Bad Man from Borger, Texas. That's why Hansen has been honored as a 2016 WWE Hall of Fame inductee.