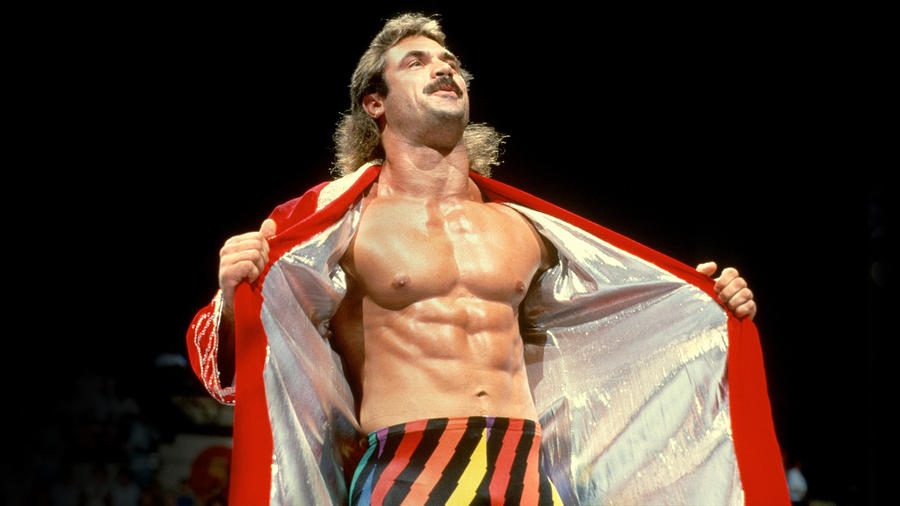 “What I’d like to have right now, is for all you fat, ugly, inner-city sweathogs to keep the noise down while I take my robe off and show the ladies what a real sexy man looks like…”

With those words, the arrogant Ravishing Rick Rude gyrated his way into WWE and quickly made an impact, leaving a trail of broken bones and hearts on his path to the top.

Rude joined WWE in 1987 after successful stops in World Class Championship Wrestling and WCW. He immediately earned the ire of the WWE Universe, deriding what he saw as a lack of physical fitness among them as he demanded silence while he disrobed. As he revealed his Adonis-like figure, catcalls could be heard from the women in the crowd as they reached for their cameras. Flashbulbs lit up arenas around the world as ladies looked to get a snapshot of their favorite hunk.

Ravishing Rick reveled in the attention and strived to draw more to himself. After he removed his glittering robe, Rude’s ring gear was often airbrushed with his smirking visage or the faces of his rivals. This was just one of the ways he got inside the heads of opponents.

Following a victory, usually picked up after his devastating “Rude Awakening” neckbreaker, Rude had his trusted manager, Bobby “The Brain” Heenan, pick a lucky lady from the crowd for him to work his magic on, leaving her with a kiss to remember him by while establishing himself as the alpha male of sports-entertainment.

Rude’s machismo led him to believe that any woman could be his at the snap of a finger. Unfortunately, when he tried to woo Jake “The Snake” Roberts’ wife, the reptilian Superstar did not respond kindly, setting off a heated rivalry.

Ravishing Rick defeated Ultimate Warrior for the Intercontinental Championship during his time in WWE before he jumped back to WCW in 1991. He made an instant impact, defeating Sting for the United States Championship within a month of his debut. Rude also went on to capture the WCW International World Title during his stint with the company.

He returned to WWE in 1997, trading in his showy attire for a suit and tie. Rude acted as the “insurance policy” for Shawn Michaels and Triple H in the newly-formed D-Generation X while also managing "The Franchise" Shane Douglas in ECW. A few months later, Rude defected from both WWE's DX and ECW to another rebellious faction, WCW’s New World Order.

Ravishing Rick Rude was brash because he could back it up in the ring. That's why he's a 2017 inductee into the WWE Hall of Fame. Anyone who disagrees is in for a Rude Awakening.