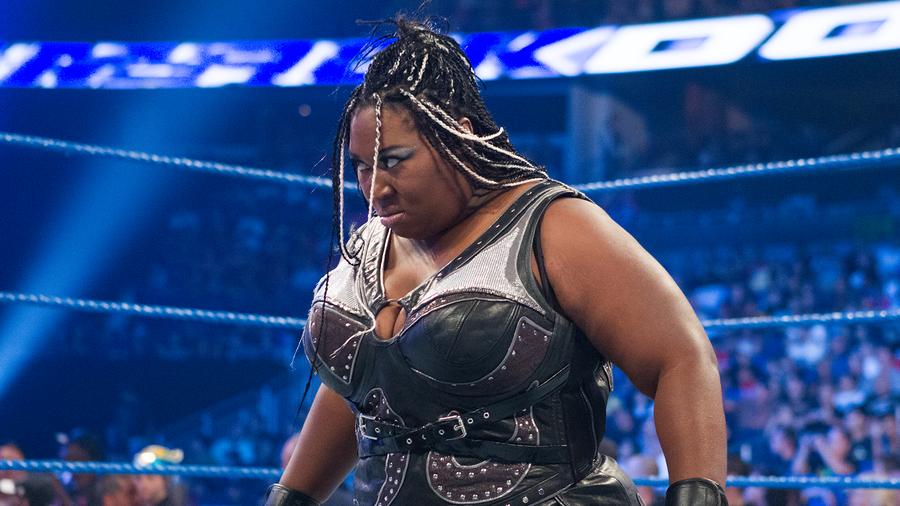 Moral causation be damned. When you cross Kharma, your fate is sealed.

At nearly six feet tall and more than 270 pounds, this bad-tempered behemoth is not your typical Superstar. Beneath her black leather gladiator-like garments is a woman who’s trained in the dojo of joshi puroresu (female Japanese wrestling) and mixed martial arts – experience garnered while on a quest to prove WWE wrong after being told at a “Tough Enough” audition that she was “too fat” to make it as a WWE Superstar.

Kharma responded vehemently to her detractors by winning championships around the globe and decimating her opposition until WWE could no longer ignore her. Then, weeks before her WWE arrival, she made certain that the women's division’s ring warriors also understood she wasn’t there to play around through vignettes in which she gleefully tore the heads and body parts off dolls.

On May 1, 2011, the braided brute made a startling debut at the Extreme Rules pay-per-view and left Michelle McCool as battered and broken as Kharma’s creepy collection of dismembered dollies. The only visual more frightening than Kharma decimating the first-ever Divas Champion, however, was how much she visibly seemed to enjoy doing so.

In the weeks that followed, Kharma traversed between Raw and SmackDown, where she viciously annihilated any woman she got her hands on. Her participation in the 2012 Royal Rumble Match was her only official WWE match. Then, almost as suddenly as she first appeared, she left. Her reasons, as she revealed to the WWE Universe, were personal.