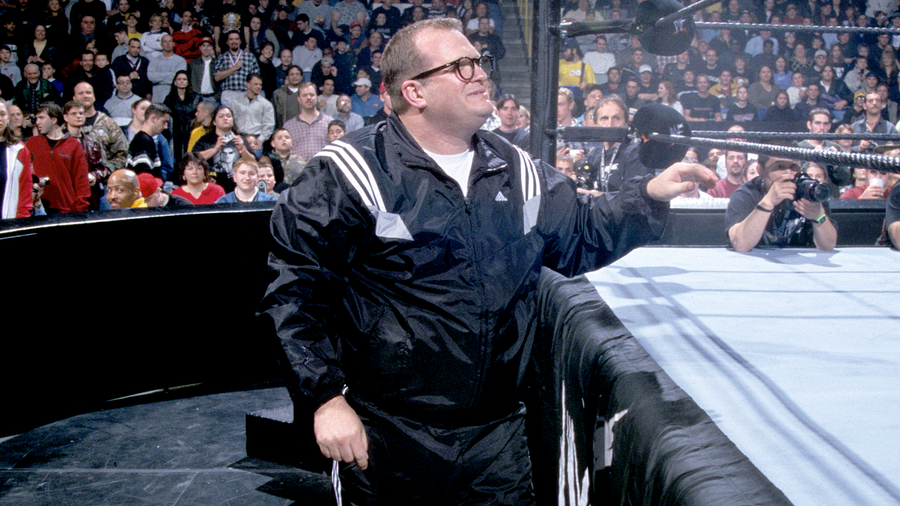 The hilarious Drew Carey has gained fame and fortune as a stand-up comedian, sitcom star and host of the wildly popular game show “The Price is Right.” But the funnyman is best remembered by the WWE Universe for the night he was almost destroyed by Kane.

It was at the Royal Rumble in 2001 when Carey stopped by the New Orleans Arena for an impromptu meeting with Mr. McMahon. The comedian was putting on his own pay-per-view event that week and was seeking advice from the chairman. But after Carey put the moves on Mr. McMahon’s former flame, Trish Stratus, he was talked into competing in the Rumble by the vengeful CEO. The Cleveland native accepted the spot, thinking it was all in good fun. He was wrong.

Joining the bout at No. 6, Carey was lucky enough to enter an empty ring and bask in the adulation of the WWE Universe as the first celebrity to ever appear in the Rumble match. And then Kane's music hit. Through hellfire and brimstone, The Big Red Monster stomped into the ring and got into the comedian's face with clear intent to do harm. A master of improv due to his stint as the host of "Whose Line Is It Anyway?", Carey attempted to get out of the situation by offering a handshake and a wad of money to The Devil's Favorite Demon, but Kane throttled Drew's neck anyway. Just when it looked like Carey was going to be chokeslammed back to Cleveland, Raven entered the match and attacked Kane, giving the actor a chance to leap over the top rope and run right out of the arena.

Carey was wise to beat feet. That night, Kane went on to set a Royal Rumble record by tossing 11 men over the top rope. If The Devil’s Favorite Demon had been able to break the best-selling author like he wanted to, chances are "The Price is Right" would have a different host right now.

But Drew Carey did survive his one foray into a WWE ring and has continued to enjoy a successful career ever since. And now he's a member of the celebrity wing of the WWE Hall of Fame.