The Land of the Rising Sun 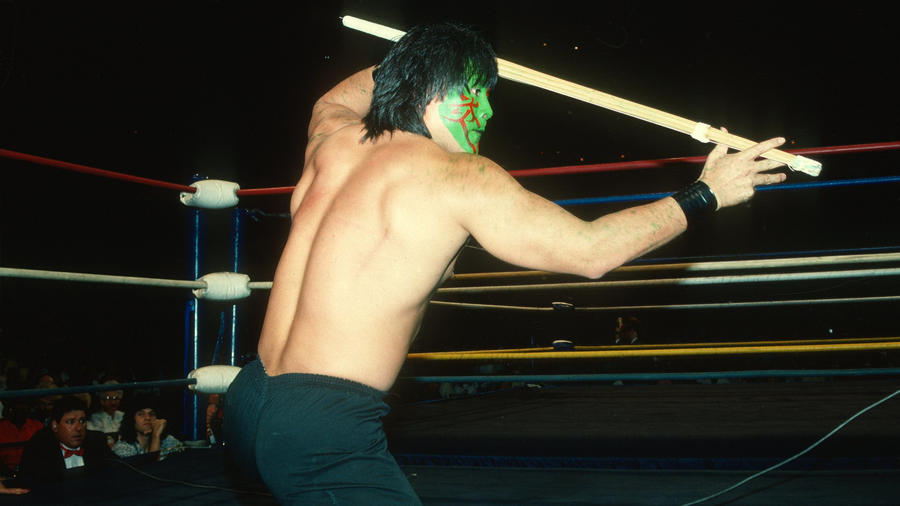 Innovative, aggressive and unpredictable, The Great Muta has long been considered an integral part of Japanese wrestling culture, but it was in World Championship Wrestling in the late 1980s that the unique competitor first cultivated his fascinating persona.

Debuting in 1989 as an associate of managers Gary Hart and Hiro Matsuda, Muta was introduced as the son of The Great Kabuki — the first competitor to captivate American wrestling fans with Asian mysticism, theatrical face paint and the dreaded poison mist. But The Great Muta’s startling athleticism and threatening ring presence allowed him to connect with audiences in ways Kabuki could not.

Although billed as a martial arts master, Muta’s offense extended far beyond the basic kicks and strikes every Asian competitor of his era threw. The man was an alchemist when it came to mat science, crafting both the punishing Muta Lock and the Shining Wizard — a vicious running kick to the head of a downed opponent. The other maneuvers in his arsenal — namely the moonsault and cartwheel back elbow — were every bit as breathtaking.

Muta found his ultimate North American rival in Sting. While both wrestlers were young and athletic with vibrantly painted faces, Muta’s awkward animated silence provided the perfect counterpart to the unbridled enthusiasm of the California beach bum. With their roles as hero and villain clearly defined, the WCW standouts had an exhaustive series of matches in the late ’80s and early ’90s that presented them as the leaders of a new generation.

The daring innovator may have achieved major stardom in the United States had he not spent the majority of his career competing in Japan. Viewed as a cult icon by the wrestling fans who tracked down his bootleg videos and YouTube clips, The Great Muta was a major asset to both All Japan and New Japan Pro Wrestling. In the two biggest Japanese companies, he captured their major titles on multiple occasions while thrilling in bouts against Genichiro Tenryu, Jushin “Thunder” Liger and a horror show with Hiroshi Hase that has become an urban legend thanks to the pints of plasma Muta spilled on the canvas.

Muta returned to WCW sporadically up until the company’s demise — including a strange final run alongside Vampiro and The Insane Clown Posse in 2000 — but the best work of his later years was done in Japan. Constantly surprising even the most jaded viewers with phantasmagoric entrances, gorgeous ring gear and a fearless approach to the craft of wrestling, The Great Muta remains a brilliant ambassador for sports-entertainment.