Using his cane as a weapon 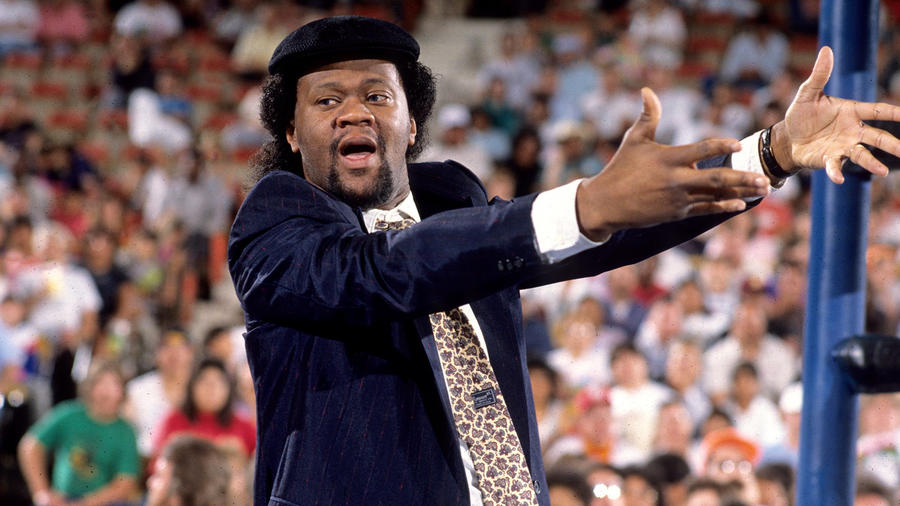 He may have been a "Jive Soul Bro," but Kenneth "Slick" Johnson is one of, if not the most influential African-American managers sports-entertainment has ever seen. In fact, the self-proclaimed "Doctor of Style" rose through the ranks so quickly that he made it to the bigtime before his first anniversary.

Slick's career began in 1986 in the Central States territory, where he managed several Superstars -- most notably "Bulldog" Bob Brown and "Hacksaw" Butch Reed. That summer, however, Slick and Reed were on the short end of a Loser Leaves Town Match against the legendary Bruiser Brody, leaving the "Doctor of Style" without a home only months after his debut.

But you can't keep the Slickster down for long.

Late in 1986, Slick entered WWE as a protégé of Hall of Famer "Classy" Freddie Blassie. Looking to diversify his holdings, Blassie sold half interest in his stable of Superstars to the "Doctor of Style," giving Slick co-managerial rights to such greats as Nikolai Volkoff, The Iron Sheik and Hercules. After fully taking over Blassie's responsibilities in 1987, Slick also brought Reed into WWE as one of his clients.

Once out on his own, Slick was known for two things: His impeccable dress code and using his cane as a weapon to help his charges win matches. Unfortunately for the "Doctor of Style," those two worlds collided at WrestleMania III. Following Reed's win over Koko B. Ware, Slick and "The Natural" engaged in some chicanery with the cane; Tito Santana, a frequent victim of Slick's attacks, rushed the ring and literally tore the clothes off Slick's back, leaving his spiffy suit a tattered mess. Not one to admit defeat, however, the Slickster came out with Nikolai Volkoff & Iron Sheik later in the night still wearing that torn-apart suit.

During his first four-year stint in WWE, Slick also managed the Twin Towers -- Akeem & Big Boss Man -- as well as Rick Martel and Warlord, among others. However, he became known just as much for his mouth as his managerial prowess; his jive style always made him an unforgettable interview, and even led to him singing his own entrance theme, "Jive Soul Bro," in 1987 as part of Piledriver -- The Wrestling Album 2.

Slick left WWE in 1990, but would return in 1992 as a new man. Having become an ordained minister during his time away from WWE, he returned as Reverend Slick and was often seen delivering uplifting, positive sermons. Our fans quickly took to the "new" Slick, and his transformation into a full-fledged fan favorite became complete in 1993 when he "saved" Ugandan savage Kamala from manager Harvey Wippleman and handler Kim Chee. The Slickster took over as Kamala's manager, teaching the former savage how to be a bit more civilized, and our fans began to cheer the Ugandan Giant as well. Unfortunately, Slick left WWE for good soon after.

These days, he still pops up at ringside from time to time -- most notably at WrestleMania 23, where he joined in a locker room dance party -- but spends most of his time working as a minister in his native Texas, a profession perfectly suited to a great orator such as himself. You can read more about Slick's current doings in WWE.com's "Where Are They Now?"

With his smooth talking, flashy outfits and respected managerial prowess, Slick was certainly one of the pre-eminent managers of his time. As he sang in his entrance theme, the "Doctor of Style" certainly was "lean and mean, with pockets full of green," but he was also one of the most influential African-Americans sports-entertainment has ever seen.