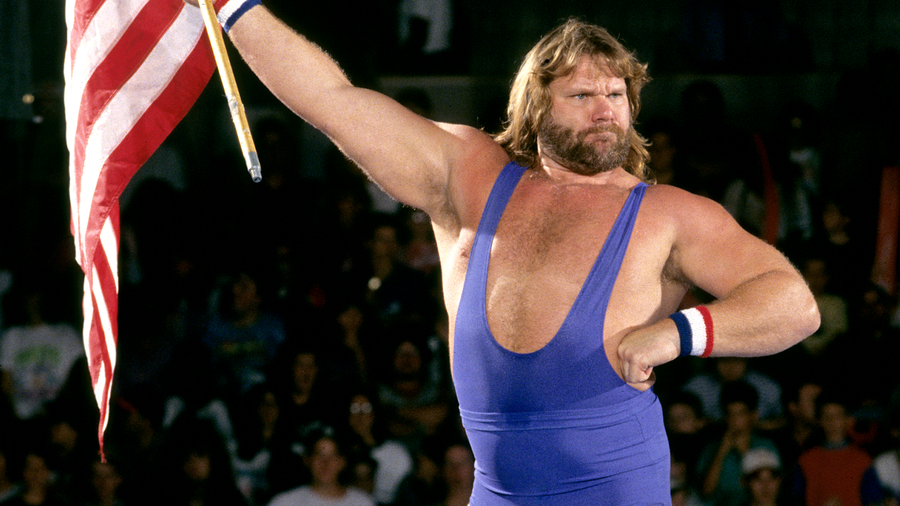 No Superstar in history was as patriotic as "Hacksaw" Jim Duggan.

A true red-blooded American, the tough but lovable big guy always marched to the ring with a 2x4 slung over his shoulder and a red, white and blue flag gripped tightly in his hand. Often going up against underhanded foreign villains, Duggan would always get the crowd behind him by inspiring massive chants of "U.S.A.! U.S.A.!" that would shake the rafters and intimidate his opponents. For more than two decades, "Hacksaw" defended America's honor in the ring and enjoyed distinction as one of the most recognizable Superstars in the world.

Duggan's immense popularity did not come overnight, though. An exceptional athlete, "Hacksaw" was drafted by the Atlanta Falcons, but was later cut due to knee injuries. With his football career over, Duggan turned his attention to sports-entertainment. Starting out in the late '70s, the powerful grappler competed across the country under the name "Big" Jim Duggan. The tough guy clearly had strength and charisma, but there was little to distinguish him from the hundreds of other brawlers ruling the rings at the time.

It wasn't until the New York native joined Mid-South Wrestling in 1982 that he began to develop the personality traits that fans love him for today. After battling Butch Reed for the rights to the nickname "Hacksaw," Duggan began carrying a 2x4 to the ring. The big man's block of wood became an iconic part of his persona, but its beginnings were practical. With fans being extremely overzealous and often dangerous at the time, Duggan's mentor, Bruiser Brody, suggested he lug a weapon to the ring to protect himself. "Hacksaw" grabbed a 2x4 and the rest is history.

The 2x4 would be firmly in Duggan's grasp when he joined WWE in 1987. Wasting no time in displaying his patriotism, "Hacksaw" immediately locked up with the massive Russian known as Nikolai Volkoff and had many hard-hitting matches with the dangerous Soviet. The following year, "Hacksaw" had one of the biggest victories of his career when he won the inaugural Royal Rumble by eliminating One Man Gang. The victory was proof that Duggan was the real deal.

In the years that followed, the patriot continued to cultivate a massive fan following through his heroic battles against hated villains like Dino Bravo, Bad News Brown and Boris Zhukov. Duggan even defeated Haku in 1989 to win the right to call himself the "King of Wrestling." The shiny crown may have looked out of place atop "Hacksaw's" smiling mug, but he wore the prize with great pride.

Throughout the early '90s, Duggan's reputation as a fan favorite carried on, but he eventually suffered a series of disappointing losses to the likes of Yokozuna and Bam Bam Bigelow. The losing streak led "Hacksaw" to make a surprising change when he joined World Championship Wrestling in 1994. The move proved to be a good one for him, though, as he defeated "Stone Cold" Steve Austin to win the United States Championship on his first night in the company. Duggan would battle the likes of Big Bubba Rogers and Diamond Dallas Page over the next four years before something changed his life forever.

In 1998, "Hacksaw" was diagnosed with kidney cancer. The disease was an intimidating opponent for a man who had locked up with the likes of Andre the Giant, but Duggan refused to go down without a fight. Thanks to early detection and "Hacksaw's" unbreakable spirit, he beat cancer and amazingly returned to the ring with little time off.

After finishing out his contract with WCW, Duggan made his long-awaited return to WWE in 2005. Teaming with talented young Superstars like Super Crazy and Eugene, "Hacksaw" was able to pass on everything he'd learned throughout his life to a new generation of competitors. And he was still able to stir the WWE Universe into a frenzy of "U.S.A.! U.S.A.!" chants like he always had.

Duggan has made sporadic appearances in WWE over the last few years, but his popularity has never waned. Still carrying his 2x4 and waving Old Glory proudly, "Hacksaw" is a bona fide legend in the ring and truly deserving of his spot in WWE's Hall of Fame class of 2011.