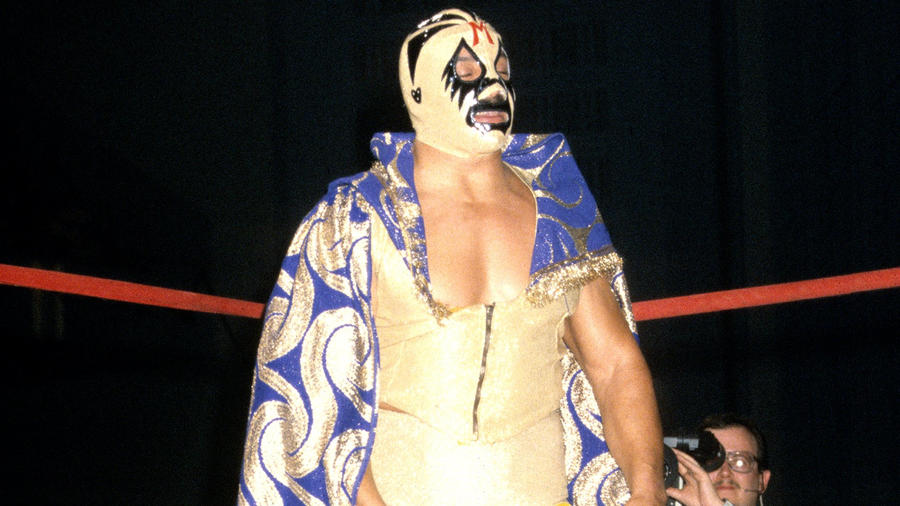 Since the early 1900s, Mexican luchadores have been revered as idols in their home country, but the masked sensation known as Mil Máscaras was the first of them to translate his regional success into international stardom. Athletic, colorful and explosive in the ring, “The Man of 1,000 Masks” established himself as a major attraction in the United States, Japan and other corners of the globe in the 1970s and paved the way for the future success of Mexican competitors like Rey Mysterio, Eddie Guerrero and his nephew, Alberto Del Rio.

Making his ring debut in Guadalajara in the mid-1960s, the competitor quickly became a cultural phenomenon thanks to a 1966 film that presented his origin story. Entitled Mil Máscaras, the movie revealed that the mystery man was actually an orphan who was raised by a team of scientists to become a superhuman athlete. Following the picture’s success, other more outlandish films followed, including 1968’s Las Momias de Guanajuato, which featured the luchador battling mummies while wearing his trademark mask.

The fans who lined up at movie theaters to watch Mil Máscaras rumble with the undead also paid to see him compete in the ring, which translated to major box-office success for the agile grappler. This ability to draw a crowd had promoters clamoring for his name on the card, leading Mil Máscaras to make his U.S. debut in Los Angeles in 1968.

With his high-flying dives and dazzling flips, the Mexican competitor was an exciting change of pace for the California crowds who were more accustomed to the ground-based attacks of grapplers like John Tolos and Gene LeBell. The colorful masks of Mil Máscaras also set him apart from his opponents in their dull boots and trunks. In fact, he rarely wore the same hood twice.

As his reputation grew, Mil Máscaras made his way to Tokyo where his wild offense and flashy ring gear inspired a whole new generation of competitors in Japan. Legends like Tiger Mask and Ultimo Dragon may have never existed had it not been for Mil Máscaras.

In 1972, the luchador made history again when he became the first masked man to perform in Madison Square Garden. Up until that point, an antiquated New York law had prevented grapplers from competing under a hood in the arena, but the rule was finally overturned so that WWE could feature the Mexican sensation. Throughout the decade, Mil Máscaras continued to be a big draw for the sports-entertainment powerhouse and came very close to becoming WWE Champion during a series of competitive matches with “Superstar” Billy Graham.

In demand all over the world, Mil Máscaras rarely stayed in the same place for long, preferring to move on to the next challenge. During his amazing and unpredictable career, the warrior challenged Harley Race for the NWA Championship in Japan, battled Cactus Jack at WCW’s Clash of the Champions and even competing in the 1997 Royal Rumble where he had the unique distinction of eliminating himself from the bout.

Celebrating his 69th birthday in 2011, Mil Máscaras continued to do what he does best, locking up for sporadic bouts in Japan and Mexico and stepping in front of the cameras for his latest supernatural thriller. Although he can still compete himself, the masked sensation can also step back and admire the many Superstars he impacted and influenced.

It’s a long and proud legacy that has earned Mil Máscaras millions of admirers and admission into the WWE Hall of Fame Class of 2012.