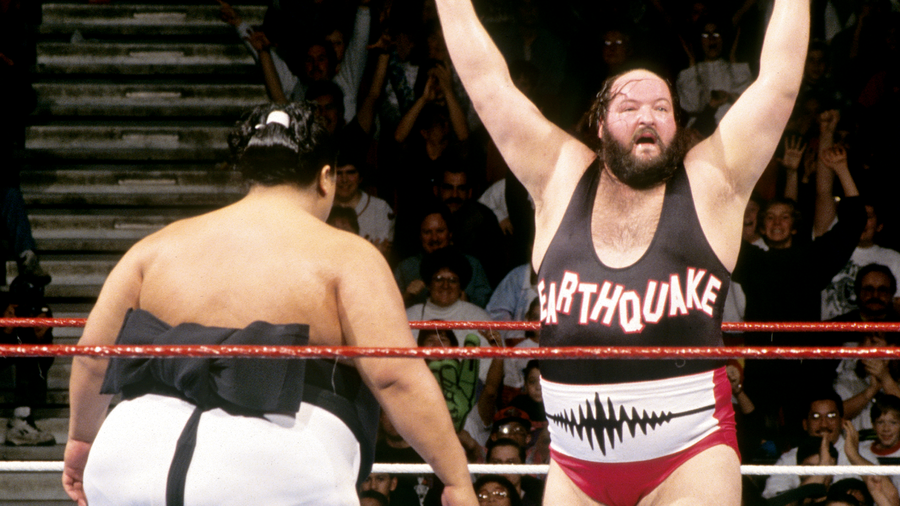 A champion sumo wrestler before entering the ring, the gigantic Earthquake first captured the attention of the WWE Universe in 1989 when he squashed Ultimate Warrior and joined forces with Dino Bravo and Jimmy Hart. Then known as The Canadian Earthquake, the big man quickly laid many opponents to waste, including Hercules at WrestleMania VI.

By 1990, the near 500-pounder was such a dominant competitor that he set his sights on Hulk Hogan. The behemoth used his mass to crush Hogan's ribs during an edition of The Brother Love Show and nearly defeated The Hulkster in their bout at SummerSlam in 1990.

The following year, Earthquake would stun the WWE Universe when he attacked Jake "The Snake" Roberts. In one of the most shocking moments in WWE history, the big man repeatedly jumped on the bag containing Jake's beloved snake, Damien. Earthquake would go on to actually cook and eat the python, proving how vicious he could be.

Later that year, the giant teamed up with Typhoon to form The Natural Disasters. One of the largest duos in wrestling history, the massive men battled great teams like The Legion of Doom and Money, Inc. and captured the World Tag Team Championships in 1992. Around this time, Earthquake had a surprising change of heart and became one of the WWE Universe's favorite Superstars.

Following his split with Typhoon, the Canadian would battle other big men like Bam Bam Bigelow, Adam Bomb and Yokozuna. Earthquake even faced the massive Japanese Superstar in a rare Sumo Match on Raw, which he won.

Soon after, the former World Tag Team Champion parted ways with WWE and made the move to WCW. Here, he competed under the name Avalanche and, later, The Shark and engaged in rivalries with Sting, Hulk Hogan and Big Bubba Rogers.

Earthquake made his last WWE appearance in 2001 in the memorable Gimmick Battle Royal at WrestleMania X-Seven where he was reunited with his old friend, Typhoon.

Sadly, Earthquake passed away in 2006 at the age of 42 after a lengthy battle with bladder cancer.