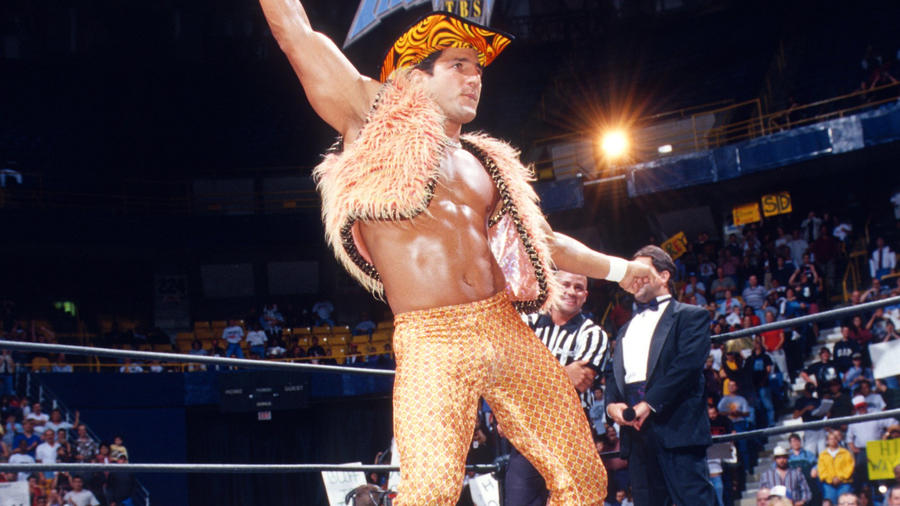 During WCW’s heyday, Disco Inferno danced his way into the hearts of WCW fans, becoming one of the most memorable personalities of the promotion’s most successful era.

The boogie man from Brooklyn, N.Y. made his WCW debut in 1995, channeling John Travolta’s legendary performance in “Saturday Night Fever.” Although his dance moves and wardrobe were decades out of style, Disco Inferno was a formidable competitor – even if he sometimes needed a cheat sheet to remember how to apply a standing figure-four leg lock.

Disco Inferno battled many of WCW’s best stars, including Dean Malenko and Eddie Guerrero, but his most memorable rivalry came against fellow dancing competitor Alex Wright. Das Wunderkind – a German techno dancer – was not a fan of the outdated 1970s dancing style. Alas, Disco Inferno won the WCW Television Title after defeating Wright on the Sept. 22, 1997 edition of Nitro.

After losing the title, Disco set aside his differences with Wright to form a comedic tag team known as The Dancing Fools. Often accompanied by Tokyo Magnum, the group delighted — and sometimes annoyed — audiences, but didn’t find a great deal of success and eventually returned to singles competition.

Disco Inferno went on to become an unexpected ally of the nWo Wolfpac. Although he was never a full-fledged member of the group that included Sting and Lex Luger, he did become a member of the nWo “Elite” when both nWo Hollywood and the nWo Wolfpac reunited in January 1999. The New World Order soon disbanded and Disco Inferno danced his way into contention for the WCW Cruiserweight Championship. Despite exceeding the title’s strict weight limit, he defeated Psicosis in October 1999 to capture the championship.

Following the “reboot” of WCW by Vince Russo and Eric Bischoff, Disco Inferno joined the likes of Rey Mysterio and Billy Kidman in a group called The Filthy Animals. Renaming himself Disqo in a nod to “Thong Song” rapper Sisqo, he unsuccessfully challenged Lieutenant Loco for the Cruiserweight Championship. At Fall Brawl 2000, Disco Inferno turned on The Filthy Animals before reuniting with Alex Wright in a tag team now called The Boogie Knights.

When WWE purchased WCW in 2001, Disco Inferno did not join the rival organization and competed on the independent scene before retiring from active competition. Regarded as one of WCW’s most unique personas, Disco Inferno remains an icon of the fun that was had amidst the intense television ratings battles of the Monday Night War.