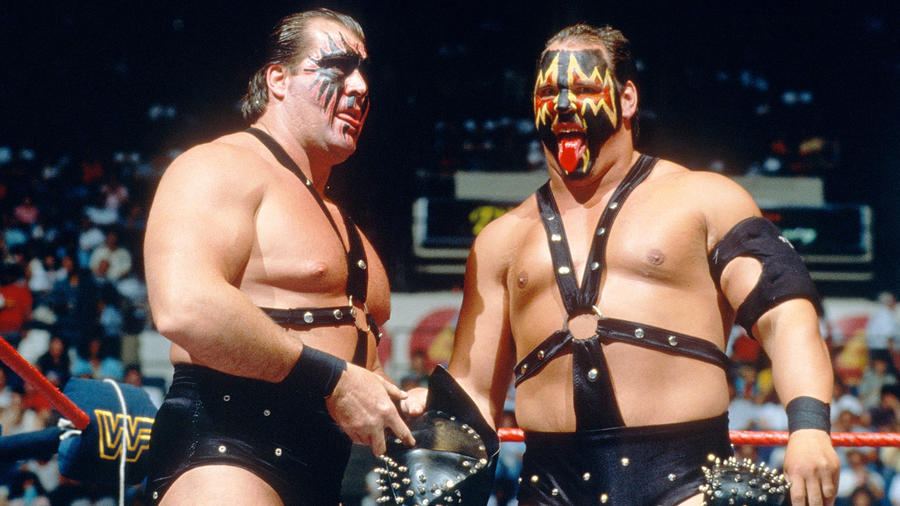 Clad in black leather and spikes, Ax and Smash steamrolled into WWE from Parts Unknown in the late 1980s and made it painfully clear that they were going to demolish any team that stood in their path. In the ring, they removed their black monster movie masks to reveal painted faces that intimidated opponents before the match even started.

Once the bell rang, Demolition made an immediate impact in the tag team ranks, using brute force to pound their opposition into submission. Few teams, if any, could muster enough offense to stagger Ax or Smash, establishing the painted warriors as a force to be reckoned with in WWE.

Though they were initially managed by “Luscious” Johnny V, the bruisers ditched the loud New Yorker for the subdued, yet devious Mr. Fuji. It was a match made in heaven (possibly hell), as Fuji passed on all of his tricks to Ax and Smash, giving their brutal brawling style a cunning new edge.

It wasn’t long before Demolition had titles around their waists as the pair bulldozed through Strike Force, Tito Santana and Rick Martel, at WrestleMania IV to capture the World Tag Team Championships. Ax and Smash went on to dominate WWE as champions for the next 478 days — a record that stood for 28 years until until it was surpassed by The New Day's 484-day tenure in 2015-16.

Ax and Smash captured the titles two more times before deciding that their team was missing a little something. They added another member during their third championship reign in the massive Crush. The three wreaked havoc throughout 1990, with Smash and his new partner taking care of business inside the ring. Ax watched intently from ringside, running interference when necessary to protect their championships.

When their final reign as champions ended, Ax left, paring Demolition down to a duo once again. Looking to regain some of their former success, Smash and Crush reunited with Mr. Fuji briefly before exiting WWE in 1991.

The path of destruction Demolition carved through WWE would never be forgotten. No team has come close to causing the devastation that the original Demolition duo, Ax and Smash left in their wake,