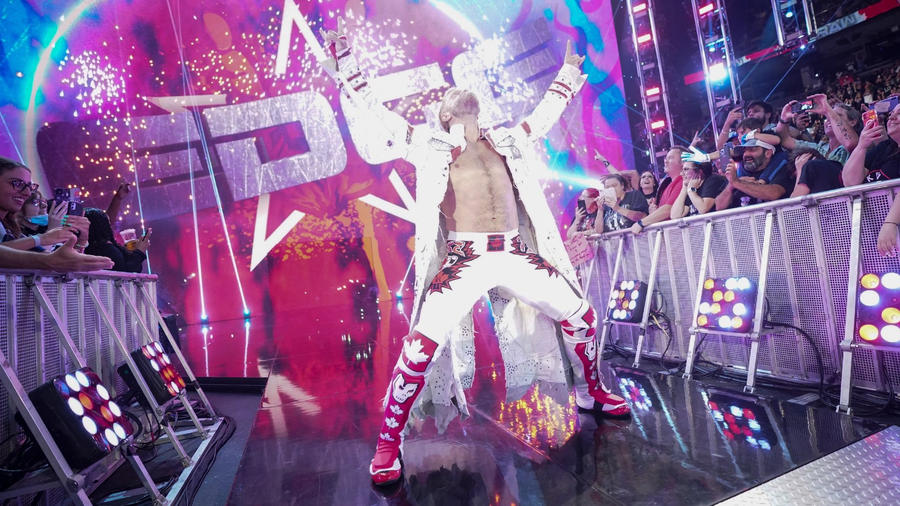 In another life, Edge could have been a rock star. From his voluminous hair to his long leather jackets and double-horns signature pose, every detail of his WWE image screamed it. As the pyro blasted into the air behind him on the entranceway before he stepped into the ring, he injected arenas with the energy of a packed concert – without the dangers of crowd-surfing and mosh pits. There was even a legion of groupies – Edgeheads – who tracked his every move.

It's no surprise, then, that Edge is a guitar collector and grew up listening to KISS, a band famous for their flamboyant outfits and outrageous stage antics. What is a surprise is how a shy high schooler from the little town of Orangeville, Ontario, evolved into The Rated-R Superstar.

Even though he was voted "Most Likely to Be WWE Champion" by his classmates, Edge's path to the grand stage was anything but predetermined. The only spotlights beaming down were at the local factories where he worked odd jobs to help his single-parent mother pay the bills. Still, Edge dreamed big while idolizing larger-than-life entertainers like Hulk Hogan and Randy Savage. At 18, Edge got the lucky break he needed in the form of an essay contest offered by a gym in Toronto. The prize? Free wrestling training – a prime opportunity for The Ultimate Opportunist.

Edge had some fine company as he worked his way up the independent scene in the '90s: his childhood friend and partner for countless five-second poses, Christian. When Edge was signed to a WWE contract in 1997, it was only a matter of time before Christian would also climb the ladder, following his best bud into uncharted territory.

"E&C" made sweet music as a tag team, using a lot more than just Con-Chair-Tos to claim seven championships together. A Triple Threat Ladder Match victory at WrestleMania 2000 over The Hardy Boyz and The Dudley Boyz laid the foundation for a series of landmark Tables, Ladders & Chairs (TLC) contests, and some of the greatest tag team action of all time. Of course, tag teaming wasn't Edge's only specialty, as he masterfully crafted a singles career and captured a whopping 31 total titles – many of them the WWE Universe didn't even see coming.

Beyond his ability to capitalize on opportunities, Edge became known as The Master Manipulator because he wasn't afraid to cross the line in order to rattle the competition. After he made history in 2006 as the first man to ever cash in the Money in the Bank briefcase, he rubbed his WWE Championship triumph in the face of all challengers with an R-rated celebration on Raw; more explicitly, a frolicking good time with Lita on a bed placed right in the middle of the squared circle. Mind games were taken to a whole new level by the self-proclaimed "most-watched champion."

A debilitating injury forced Edge to retire in 2011, but in the 2020 Royal Rumble Match, The Ultimate Opportunist made a surprise return. Former Rated-RKO partner Randy Orton claimed that he wanted to send Edge back into retirement for his own good, but he was thwarted when The Ultimate Opportunist outlasted The Viper in a brutal Last Man Standing Match at WrestleMania 36. If we've learned one major lesson from Edge's career, it's to always expect the unexpected, especially after being chosen by Raw in the 2021 WWE Draft. Just make sure you have the benefit of flash photography.

In February of 2022, Edge shockingly turned on the WWE Universe, forming The Judgment Day with Damian Priest and Rhea Ripley in his fight against AJ Styles, who he would go on to defeat at WrestleMania 38. The night after WWE Hell in a Cell, Edge would recruit Finn Bálor into his faction. However, this ended up being a ruse, as Bálor, Priest and Ripley backstabebd Edge, forcibly removing him from the faction. Edge would gain a modium of retribution as he defeated Priest in his hometown of Toronto on the August 22nd edition of Monday Night Raw.