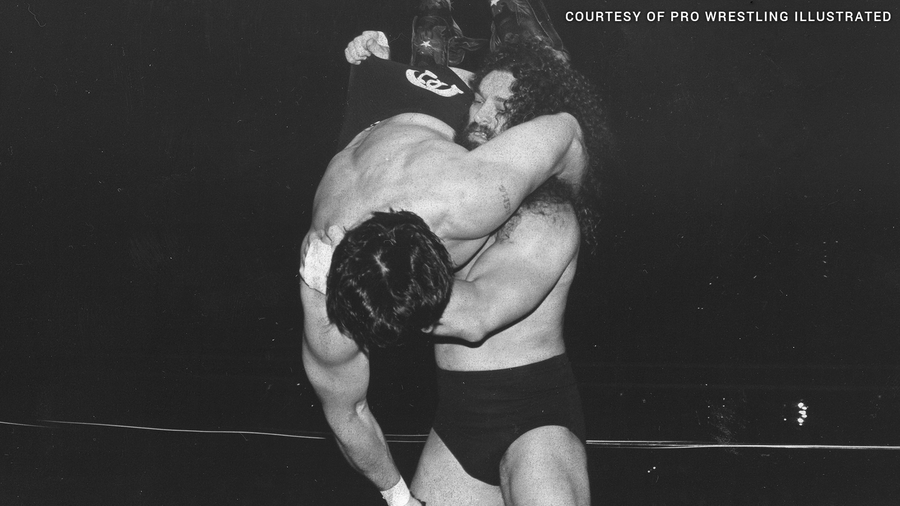 Bruiser Brody — like many men who die before their time — has been mythologized by those fortunate enough to have witnessed the carnage created by the legendary brawler. The fans who cowered from Brody’s steel chain in Tokyo’s Korakuen Hall or watched in horror as he manhandled Bruno Sammartino in Madison Square Garden will say they never saw a competitor as unpredictable, as dangerous and as ruthless as Bruiser Brody. And they will be telling the truth.

What made Brody so threatening? It may have been the fact that no one was safe when the madman was in action. Adopting a wild, freewheeling, brawling style long before the dawn of hardcore wrestling, Brody attacked opponents, referees and fans with equal disregard. But Brody’s tangled hair, feral beard and furred boots often — and intentionally — belied the bright, talented family man underneath the animal exterior.

A college football player at the fabled West Texas State University, Brody struggled to break into the NFL before stumbling into professional wrestling under the name Frank “The Hammer” Goodish. His 6-foot-8, 300-pound frame made him a star from the very beginning, but the big man’s career began to build steam in 1976 when he arrived in WWE and was rechristened Bruiser Brody. Finding his persona as an intelligent monster, Brody took his show on the road, becoming the top independent wrestler in the world during the 1980s.

Fiercely self-reliant, Brody refused to stay in one territory for long, preferring to rampage across the globe in search of bigger paydays and tougher competition. He battled Dick the Bruiser in Indianapolis over the rights to the name “Bruiser,” terrified Lex Luger in an infamous Steel Cage Match in Florida and fought Abdullah the Butcher in every corner of the globe in one of wrestling’s goriest rivalries. But it was in Japan that Brody became a cult icon.

In Giant Baba’s All Japan Pro Wrestling, the beast formed a tag team with Stan “The Lariat” Hansen that was rivaled only by The Road Warriors in terms of pure power and dominance. Also teaming with Jimmy Snuka on occasion, Brody tore the house down against opponents like Jumbo Tsuruta and The Funks while becoming a mainstream star with the wrestling-obsessed Japanese. When he jumped from All Japan to New Japan to battle WWE Hall of Famer Antonio Inoki, he established himself as the country’s most sought-after performer.

Bruiser Brody’s life came to a heartbreaking end in July 1988. The victim of a killer never brought to justice, Brody passed under terrible circumstances, but the legend of sports-entertainment’s last great outlaw has only grown since that tragic day.