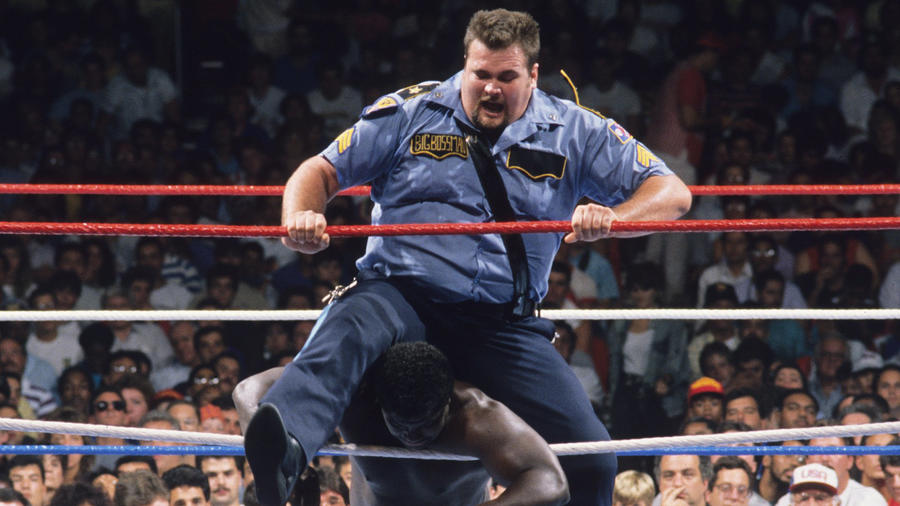 Only one Superstar has ever been entrusted with enforcing law, order and justice in WWE: Big Boss Man. The towering cop spent time on both sides of the badge during his career, but he always made sure that anyone who dared step up to him served hard time.

A former corrections officer in Cobb County, Ga., Big Boss Man was brought to WWE in 1988 by the nefarious Slick after the big man dominated his competition. The 300-plus pounder muscled around his foes like he would an unruly prisoner before handcuffing them to the ropes and introducing them to the business end of his trusty nightstick. By 1989, The Slickster saw dollar signs in his eyes when he paired up his crooked cop with Akeem, The African Dream. The gargantuan pair known as The Twin Towers never captured the World Tag Team Titles, but they helped destroy one of the most dominant duos in WWE history: The Mega Powers, Hulk Hogan and “Macho Man” Randy Savage.

Though he brutalized his cuffed competition, Big Boss Man did have morals. When The Million Dollar Man attempted to buy his services, he let the aristocrat know that he didn’t come with a price tag. The policeman’s defiance immediately endeared him to the WWE Universe, making him one of the most popular Superstars of the era.

The Boss Man made sure all the evildoers of the day paid for their misdeeds, including The Mountie, who tried to usurp the lawman’s authority in WWE. In a Jailhouse Match at SummerSlam 1991, he sent the crooked Canadian copper off to one of New York City’s roughest correctional facilities, ensuring he’d know what life was like behind bars.

Though he was on the straight and narrow, his past came back to haunt him in the form of Nailz, a former convict who claimed The Big Boss Man had brutalized him behind bars.  The officer was viciously assaulted by the prisoner, putting him out of action for several weeks. When he recovered, cop and convict squared off in a Nightstick Match where the convict was vanquished.

Big Boss Man returned to WWE in 1998, eschewing his policeman’s blues for riot squad black as he took on the role of bodyguard of Mr. McMahon in his heated rivalry with “Stone Cold” Steve Austin. This time, the former corrections officer showed he had no morals whatsoever, stooping to new lows with each passing week during WWE's Attitude Era. He brought the gigantic Big Show to tears when he dragged the casket of the giant's late father away from his funeral behind a car. Even worse, while embroiled in a bitter rivalry with Al Snow, Big Boss Man kidnapped his foe’s beloved Chihuahua, Pepper. When it seemed like the two had reached a truce over a nice dinner, the sadistic cop revealed that he had prepared a special meal for Snow using the remains of his pet. Though it seemed to take on a new meaning, he was still forcing his foes to go through “hard times.”