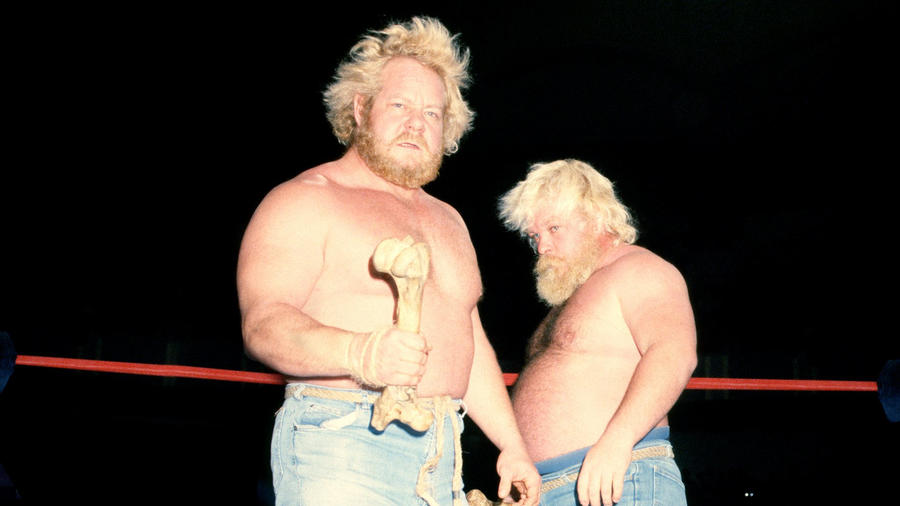 The habitat of Parts Unknown has churned out many strange individuals, and The Moondogs were amongst the most bizarre groups to ever crawl out of the mysterious wasteland.

In the latter part of 1980, manager extraordinaire Captain Lou Albano introduced Moondog Rex and Moondog King to the WWE Universe. A pair of gruff, unkempt men that wore shredded jeans and carried chewed-up bones to the ring, The Moondogs were unorthodox to say the least. Still, despite his team’s lack of polish, Albano guided them to victory after victory, which positioned Rex & King as the No. 1 contenders to the WWE Tag Team Championships, held at that time by Tony Garea & Rick Martel.

On March 17, 1981, Albano’s charges dethroned the champs to win the World Tag Team Titles. Shortly after their victory, however, King headed back to Parts Unknown. His disappearance signaled the entry of a third Moondog — Spot — who was every bit as vicious and maniacal (if not more) than King was.

Moondog Spot inherited his half of the World Tag Team Championships, and The Moondogs picked up where they left off, successfully defending their titles against the likes of SD Jones & Dominic DeNucci, and “Quick Draw” Rick McGraw & a rookie by the name of Curt Hennig. Garea & Martel also had a number of opportunities in return matches, but always came up short. However, on July 21, 1981, The Moondogs had (according to Albano) an off night, and Garea & Martel regained the titles from Rex & Spot.

As the ’80s progressed, The Moondogs began to compete in more bouts on their own. In his most notable contest, Moondog Rex faced Hulk Hogan in a WWE Championship Match in 1984. Spot’s famous solo outing was less remarkable, as he lost to The Junkyard Dog at 1985’s Wrestling Classic in a match with no referee. JYD had to count his own pinfall! But in the wild world of The Moondogs, that kind of thing was expected.