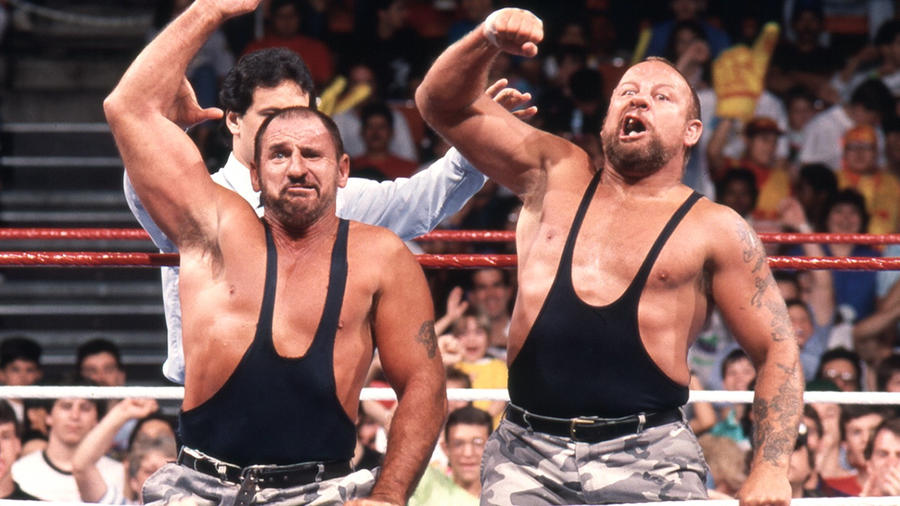 Arriving in America by way of New Zealand, the demented duo of Butch and cousin Luke were one of the wildest and most unorthodox teams the WWE Universe had ever seen.

Prior to their arrival in WWE, Luke & Butch were known as The Sheepherders, one of the most vicious tag teams to ever step in the squared circle. Proudly bearing the flag of New Zealand, The Sheepherders stormed into North America in the 1960s, making a name for themselves with brutal brawls in Hawaii, Portland and Stu Hart’s Stampede Wrestling.

Luke & Butch continued brawling across America throughout the ‘70s and ‘80s, capturing championships in various National Wrestling Alliance territories and Bill Watts’ Universal Wrestling Federation. Their penchant for ruthless battles made their sudden change in demeanor very surprising to longtime fans when they debuted in WWE in 1988.

Toothless and tattooed, the fun-loving Bushwhackers stomped to the ring in camouflage pants and combat boots, swinging their arms above their heads and licking the faces of any fans they could get their hands on. While this type of mad behavior endeared the cousins to the WWE Universe, it made the tough guys a despised pair for rivals like The Powers of Pain and The Bolsheviks.

This untamed outback savagery helped the Kiwis pick up some impressive wins in 1989, including a victory over The Fabulous Rougeaus at WrestleMania V in Atlantic City, N.J. This would not be the last time The Bushwhackers battered the French-Canadian brothers — the teams met at Royal Rumble in 1990 with Luke and Butch again getting the win.

In the years that followed, The Bushwhackers clashed with bigger teams like The Natural Disasters and The Nasty Boys. Though they didn’t always come out victorious, their popularity never waned. In fact, the duo was so well-liked that they made an appearance on the hit television show “Family Matters” in 1994, where they stepped into the ring with Steve Urkel.

In 1996, The Bushwhackers had their final full-time stint in WWE. Though they were never able to capture the World Tag Team Championship, Butch & Luke made a lasting impression on the WWE Universe and were greeted with a great reception when they made a surprise return to the ring in the Gimmick Battle Royal at WrestleMania X-Seven.

The Bushwhackers took their place in sports-entertainment history as members of the WWE Hall of Fame’s Class of 2015.