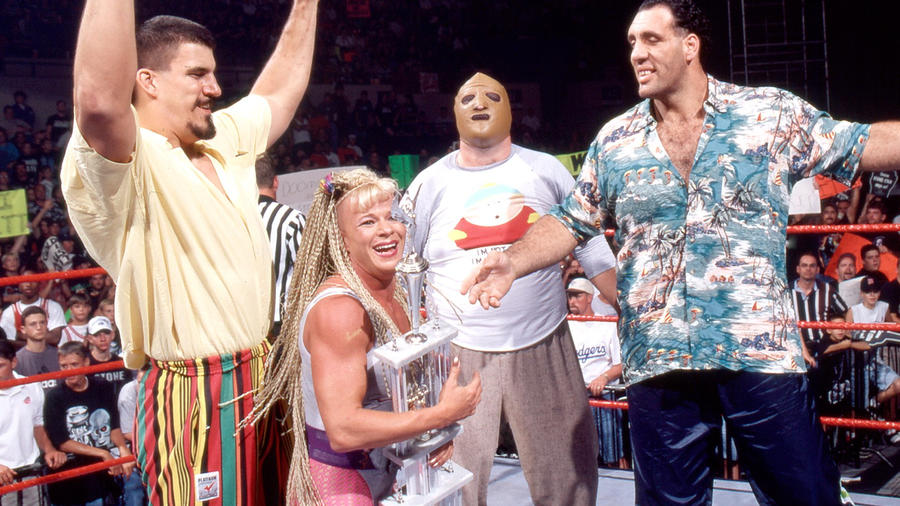 Only in the WWE Universe could a group of people that would normally be cast out from society become beloved Superstars.

That was the case with this faction of misfits. Originally introduced in 1998 as “The Parade of Human Oddities,” the megalomaniacal Jackyl intended for fans to gawk, stare, point and laugh at them like freaks, while he used them do his bidding.

He dressed up the surly Luna Vachon like a princess, made light of the masked Golga’s facial deformities and heralded the arrival of the towering Giant Silva as if he were a sideshow attraction. The Jackyl’s “Parade” swarmed around him, hugging the David Koresh wannabe as he grinned evilly.

The parade didn’t last very long, though, as The Jackyl mysteriously disappeared from WWE weeks after The Oddities’ debut. With the addition of another one of Jackyl’s outcasts, the monstrous Kurrgan, to their ranks, The Oddities found friendship in the most unlikely person.

WWE’s resident blonde bombshell, Sable, saw past Kurrgan, Golga, Silva and Luna’s looks and showed the WWE Universe their fun-loving side. Brought to the ring every night with a live performance by Insane Clown Posse, The Oddities turned WWE programming into their own personal dance party.

A tie-dye clad Kurrgan cut a rug down the aisle, doing the world’s largest Cabbage Patch. Golga showed off his fandom of “South Park,” carrying a stuffed Cartman doll and adding a puff ball to his mask, just like the cartoon characters. Giant Silva turned from a stoic monster into a happy-go-lucky titan, while Luna skipped around the ring with a gleeful smile.

Just because they were smiling didn’t mean they still weren’t dangerous in the ring. Golga’s deformities made his head impervious to pain. He smashed his skull into turnbuckles for fun. Kurrgan could crush his foes’ craniums with his bare hands and Silva used his immense size to his advantage, tossing anyone out of his way with ease. Luna, no matter how much she preened and primped, was still one of the most dangerous Divas of all time.

Whether they were boogying with ICP or steamrolling over their opposition, The Oddities made sure everyone had a ball while they were in the ring.