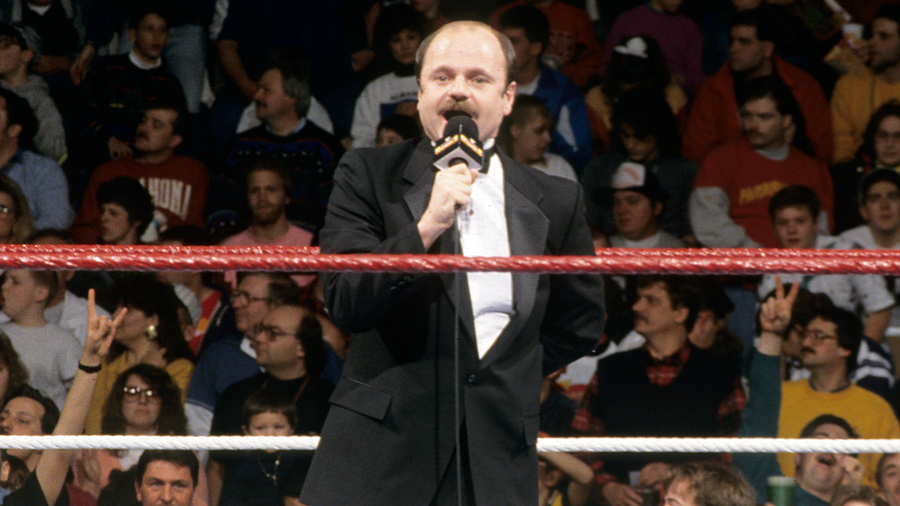 Dropkicks and armbars? They're not in his repertoire. Ironically, his greatest ring victory came from being in the winning corner of a Hair vs. Hair Match at SummerSlam in 1998. He'll jokingly admit that the closest he's come to slapping on a Figure-Four is when he crosses his shoelaces. Nevertheless, he is unquestionably one of WWE's most influential figures -- a beloved ring icon who was more than worthy of being inducted into the 2009 WWE Hall of Fame class.

We're talking, of course, about the most famous ring announcer in WWE history, Howard Finkel.

With an arsenal consisting of a microphone and booming voice tailor-made for venues like Madison Square Garden, the ring announcing style of this New Jersey native has become synonymous with the pantheons of WWE lore. For three decades, the likes of a Hulk Hogan and "Stone Cold" Steve Austin were instantly regaled as WWE Champions because Howard Finkel's resonance and timbre made it so. His tonal intonations following every match gave voice to the joy, the angst and the excitement felt by millions of fans around the world. In those moments where he'd emphatically stretch out the words "…and NEEWWW World Champion…!", Howard had, in essence, provided immediate weight and credence to the in-ring history that had just transpired. At that moment, it all mattered.

There was further reason to celebrate Howard Finkel's induction into the hallowed halls of WWE prominence in 2009. In addition to being WWE's first and longest-lasting employee, hired on April 1, 1980, Howard is the only WWE personality to have appeared on-camera at every one of these historic pay-per-views. Therefore, it is more than apropos that his achievements and golden voice be recognized during its silver anniversary.

Oddly enough, "The Fink" -- a label that has been attached affectionately to Howard over the years -- would politely dispute that he is not an employee. Employees work at a job. Since 1980, Howard has done what he loves most: He communicates with the WWE Universe. Whether it's to resume the mic and handle the ring announcing for rare, very special events, or appear on WWE live chats, or lend his immeasurable wealth of WWE knowledge and insight as a Contributing Editor at WWE.com, Howard Finkel is, first and foremost, the fans' fan. The WWE Universe loves "The Fink" dearly for that, and it is with great pride we can state that as of April 4, 2009, the WWE Hall of Fame truly has itself a voice.