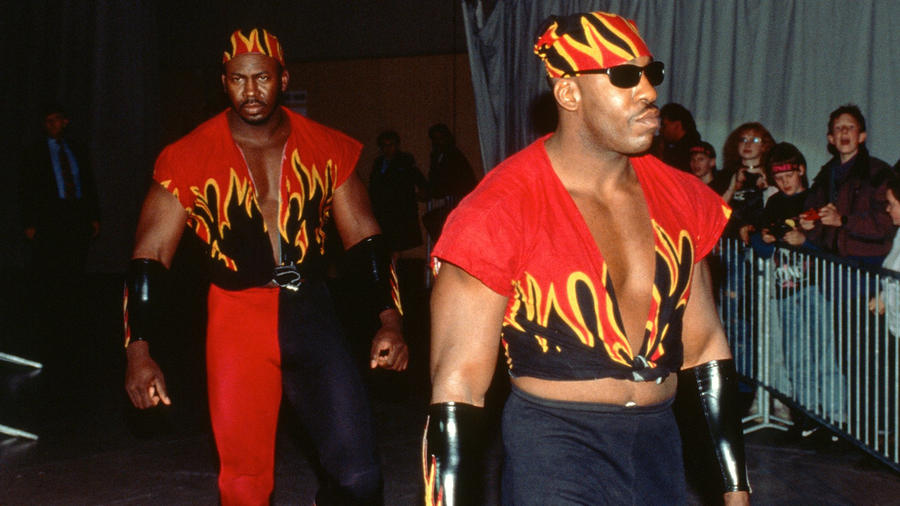 One of the most dominant tag teams in history, Harlem Heat went from 110th Street to the WWE Hall of Fame.

Booker T & Stevie Ray burst onto the scene in WCW in the summer of 1993 with an in-your-face attitude that matched their fiery name. The brothers wasted no time in lighting up WCW’s Tag Team division while mixing it up with the likes of Sting and Ric Flair. It was when the two joined forces with WWE Hall of Famer Sensational Sherri that the heat was truly turned up.

Harlem Heat captured their first WCW Tag Team Titles shortly after the calendar turned to 1995 and never looked back. Though they faced stiff competition from duos like The Road Warriors, The Steiner Brothers, Sting & Lex Luger and The Nasty Boys, Booker T & Stevie Ray possessed the guts and the hard-hitting offense to put those teams down for the count. By 1997, they had racked up seven turns as WCW Tag Team Champions.

They eventually went their separate ways, with Stevie becoming a trusted member of the infamous nWo and Booker going on to become a decorated singles competitor. But in late 1999, the two brothers reunited to set the tag team world ablaze once again. It wasn’t long before they recaptured WCW gold, and they would achieve the feat twice more before the turn of the millennium, setting a record as 10-time WCW Tag Team Champions.

It’s only fitting that nearly 20 years later, Harlem Heat is being inducted into the WWE Hall of Fame.