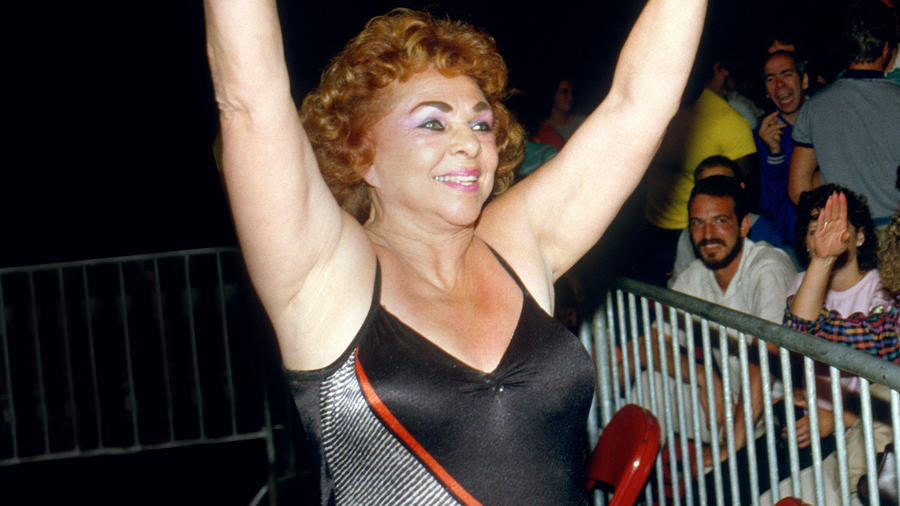 While the name Lillian Ellison may not be well-known to sports-entertainment fans, her alter ego is one that will never be forgotten: The Fabulous Moolah.

In the world of women's wrestling, there will always be one irrefutable legend that stands head and shoulders above the rest, and her name is Moolah. She was the longest reigning champion in the history of her chosen sport -- or any sport for that matter -- and she established a legacy that made her name synonymous with women's wrestling in a career that spanned over 50 years.

Born Lillian Ellison in South Carolina in 1923, Moolah became a fan of sports-entertainment following the passing of her mother; her father would take her to shows as a young girl in hopes of cheering up his distraught daughter, and little did he know the impact it would have.

Moolah was trained for the ring in the 1940s by then-Women's Champion Mildred Burke, the sport's biggest female star at the time. But her career actually began outside the ring, where she served as one of wrestling's first female valets. Dubbed "Slave Girl Moolah" by promoter Jack Pfeffer, she was an alluring presence at ringside for competitors such as the gruesome Elephant Boy and the United States Champion, "Nature Boy" Buddy Rogers.

Ellison's in-ring career began hitting its stride by the mid 1950s when she began calling herself The Fabulous Moolah. In 1956, she outlasted 12 other ladies -- last eliminating Judy Grable -- to win a Battle Royal for the vacant Women's Championship of the World. She would go on to hold the title for the next 28 years, a feat unprecedented in the annals of human achievement. During that time, she became the first woman to ever wrestle in Madison Square Garden, as she and WWE promoter Vincent J. McMahon successfully beat the ban against women's wrestling at The Garden.

In July 1984, her 28-year reign was finally ended in Madison Square Garden by Wendi Richter, a young competitor managed by pop star Cyndi Lauper. The bout aired live on MTV, giving a whole new generation of sports-entertainment fans a glimpse of the greatest lady competitor in the game's history.

Following the loss, Moolah began phasing out her in-ring exploits, choosing instead to manage protégé Leilani Kai, one of the many future Superstars she had trained during her time as champion. With Moolah's guidance, Kai beat Richter for the Women's Title, setting up a match between the two at the first WrestleMania in 1985. Richter would regain the gold, and it would be Moolah herself, under a mask as the "Spider Lady," who would finally take back the championship from Wendi not long after. During her final reign as champion, Moolah also took on another role; she became the "Queen" of WWE, often accompanying "King" Harley Race and manager Bobby Heenan to ringside.

Finally, in July 1987, Moolah lost the gold to "Sensational" Sherri Martel, and after captaining a team that defeated Martel's in the inaugural Survivor Series later that year, Moolah effectively retired from in-ring competition. As 1987 came to a close, it seemed that the queen of women's wrestling had finally come to the end of her run.

In 1995, her career was punctuated when she became the first female inducted into the WWE Hall of Fame. Inducted by then-Women's Champion Alundra Blayze, Moolah was recognized as the true pioneer -- and biggest legend -- in the history of women's wrestling.

After a 40-year career and induction into the Hall of Fame, imagine the surprise of our fans everywhere in 1999, when Moolah -- by that time in her 70s -- returned to WWE television with long-time friend and fellow competitor Mae Young by her side. That October, the unthinkable happened: Moolah defeated reigning WWE Women's Champion Ivory to win the title for the fourth time and become the oldest titleholder in the history of the sport. She didn't hold the title gold for long, but it was a testament to her amazing tenacity and ability that she was able to make such a miraculous comeback in the first place.

Over the next few years, Moolah -- usually with Mae at her side -- would make a variety of appearances in WWE. In 2003, Moolah celebrated her 80th birthday by facing Victoria on Raw; that night, she defeated Victoria to become the first octogenarian to compete in a WWE ring. Her final appearance came at SummerSlam 2007, where Moolah & Mae were spotted with Mr. McMahon in his office during the show. Less than three months later on November 2, 2007, Moolah passed away at the age of 84.

The name of The Fabulous Moolah will forever be etched in the annals of sport as the defining one in women's wrestling. Her name will always be synonymous with success, as she was a true trailblazer who set the path for the female Superstars of today to show the world what they can do.