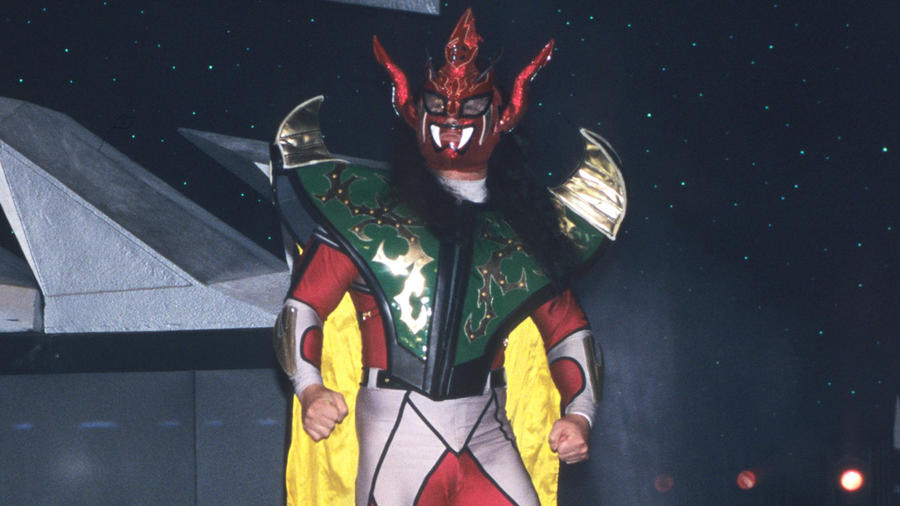 A revolutionary aerialist with the most striking ring gear in all of professional wrestling, Jushin “Thunder” Liger mocked gravity while besting the globe’s top fliers in a career that has spanned five decades. Whether tangling with Great Muta in the rings of Japan or pushing Brian Pillman to the limit in WCW, this one-of-a-kind competitor appeared to be a superhero come to life.

If Liger looked like a character sprung from a seizure-inducing Japanese cartoon, it wasn’t an accident. His persona was directly inspired by a popular anime of the same name. This wasn’t an uncommon practice in Japan — both Tiger Mask and Vader were based on animated characters — and it helped endear Liger to a young fanbase.

His distinctive horned mask and “Mighty Morphin Powers Rangers” bodysuit may have turned heads, but it was Liger’s fantastic talent in the ring that made him more than just a gimmick. A fearless innovator who had the nerve to create the Shooting Star Press, Liger devastated opponents with a mix of impactful top-rope maneuvers and blunt martial arts strikes.

First emerging as a star in Japan in the late 1980s, Liger beat noted light heavyweights like Hiroshi Hase, Ultimo Dragon and Shinjiro Otani en route to capturing the coveted IWGP Junior Heavyweight Championship a record 11 times. Considered among the top wrestlers in the world in the early ’90s, he made his name stateside in WCW in 1991 during a rivalry with the talented Brian Pillman that introduced breathtaking lightweight action to the promotion long before the institution of the Cruiserweight Title.

Liger sporadically appeared in WCW up through the late ’90s — most notably in a successful outing against Rey Mysterio at Starrcade 1996 — while actively competing in Japan, Mexico and smaller American promotions. Constantly changing with the times (Liger’s look was often updated to mirror his animated counterpart and he sometimes revealed an evil alter ego known as Kishin Liger), the aggressive flier has managed to stay relevant across four decades — even returning to the ring in the mid-90s after a brain tumor nearly took his life.

Although he replaced many of his top-rope maneuvers with a ground attack style later in his career, Liger remains an influential figure for young Superstars who have built upon his dazzling aerobatics. It’s in this way that the legend of Jushin Liger will carry on.

The next chapter in that legend was written on Aug. 22, 2015, when Liger made his WWE debut at NXT TakeOver: Brooklyn. Liger withstood the offense of Tyler Breeze, putting Prince Pretty away with a thunderous Liger Bomb that brought the sold-out Barclays Center took its feet! After his incredible career came to an end in January 2020, Liger was recognized with the ultimate honor: induction into the WWE Hall of Fame