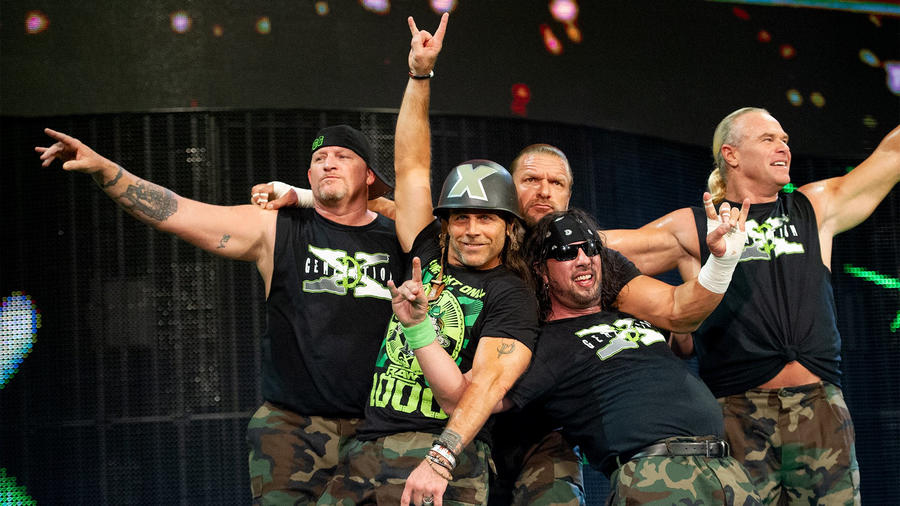 It’s strange that the first words WWE fans heard when D-Generation X made their entrance was the question, “Are you ready?”

In truth, Shawn Michaels and Triple H didn’t care if the world was ready for them or not. They were coming. In all of their lewd, aggressive, unapologetic glory, they were coming. Not down with that? Well, they got two words for ya.

That was the attitude behind DX from the moment HBK and The Game publicly revealed their allegiance in summer 1997. Original members of the backstage power group known as The Kliq, the degenerate friends and their allies, Rick Rude and female bodybuilder Chyna, made life miserable for authority figures, opponents and network censors alike. Bret Hart, Mr. McMahon and former WWE Commissioner Sgt. Slaughter were just a few of the WWE Legends who ended up bruised and humiliated after their run-ins with DX.

In the weeks leading up to Michaels’ WWE Title Match against “Stone Cold” Steve Austin at WrestleMania XIV, D-Generation X formed a partnership with boxing great Mike Tyson. When that relationship turned sour, Triple H blamed HBK and sought to add new recruits to his DX army. Enlisting the hostile duo of Billy Gunn and The Road Dogg along with cocky cruiserweight X-Pac, The Game formed the “Attitude Era’s” most popular faction. Week after week, the new DX shocked management and thrilled fans as they mocked The Rock and his Nation of Domination and staged a full-on invasion of WCW. The image of DX rolling down the street in an army tank toward a taping of WCW Monday Nitro became one of the iconic images of WWE’s most successful period.

Eventually, D-Generation X splintered, but Triple H and Shawn Michaels finally reformed their alliance in 2006. Both Superstars matured and became family men by then, but their sense of humor was as juvenile as ever. How else could you explain the giddy joy the duo took in defacing Mr. McMahon’s corporate headquarters or standing trial in front of a jury of little people following Triple H’s attack on Hornswoggle?

DX wasn’t all fun and games, though. During their last run together, the best friends beat impressive tandems like Jeri-Show, The Miz & John Morrison and Legacy on their way to capturing the Unified WWE Tag Team Championships. It was the perfect way for HBK to end his career as he retired from the ring following a loss to The Undertaker at WrestleMania XXVI.

Although they’ve all taken on different roles within sports-entertainment, DX has been known to get the band back together and raise hell the way only they can. It’s that type of attitude that got them inducted into the WWE Hall of Fame in 2019.

So, are you ready?