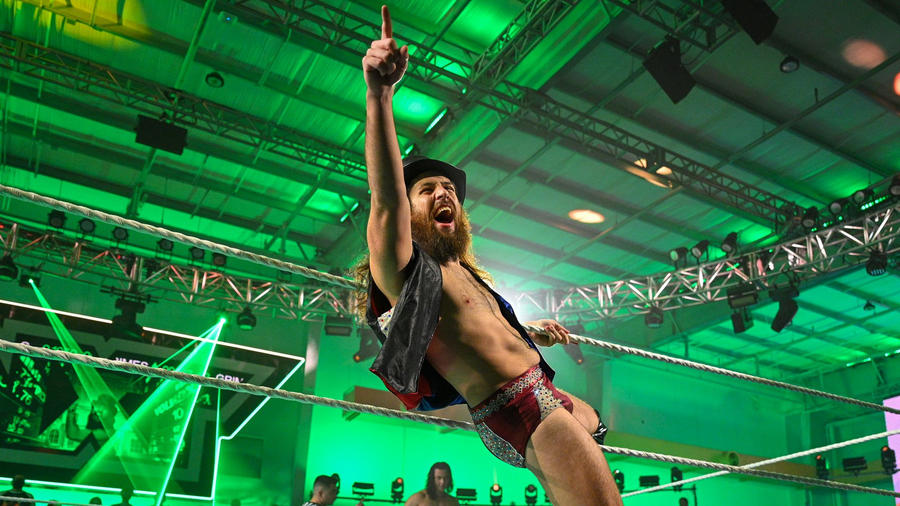 With a devastating offense that’s equal parts gritty and opportunistic, Cameron Grimes is nothing less than a technical savage.

Boasting “country power” and the force of cinder blocks for legs, the second-generation grappler from Burlington, N.C., has no trouble bringing the school of hard knocks to the ring.

If his leaping foot stomps aren’t caving in his opponents’ chests, his battering ram-like strikes are sure to make the most intimidating competitors shriek. Of course, he learned from the best. His father, Tracy Caddell, wrestled alongside The Hardy Boyz in the revolutionary indie promotion, OMEGA, and Matt & Jeff were key influences on Grimes during his formative years.

For more than a decade, the battle-tested bruiser pummeled through the competition on the independent scene, while collecting championships throughout the United States. After adding stock to his name with a slew of much-talked about matches, Grimes signed to NXT in 2019 and almost immediately made his impact felt in the inaugural NXT Breakout Tournament.

He has mixed it up with just about everyone on NXT, including LA Knight, with whom he became embroiled in a highly personal battle for the newly reinstated Million Dollar Championship.

The Million Dollar Title wasn't the only championship Grimes held during his time in NXT as he became NXT North American Champion at NXT Stand & Deliver 2022.

As loquacious as he is technically proficient, Grimes' mouth has a habit of getting him into trouble. But once the bell rings, The Technical Savage is more than capable of going toe to toe with anyone in NXT.